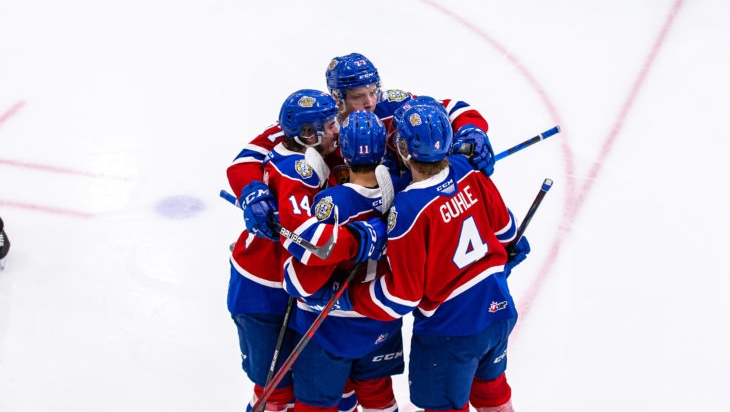 The Edmonton Oil Kings managed to beat the Winnipeg ICE with an overtime goal from Tyler Horstmann Friday.

Winnipeg drew first blood with Mikey Milne getting a shot past goalie Sebastian Cossa 8:34 into the first period.

Edmonton’s Dylan Guenther tied the game with his tenth goal of the playoffs at 13:08 in the first.

In the second period, Edmonton surged ahead to a three goal lead thanks to Simon Kubicek, Guenther and Logan Dowhaniuk.

The ICE struck back in the third, tying the game at 4-4 with two goals from Benjamin Zloty and one from Owen Pederson.

Nearly 30 seconds into overtime the ICE almost won, but Cole Muir’s shot was blocked by Cossa. Less than a minute later, Horstmann buried the puck into the Winnipeg net, sealing the first game in the series for Edmonton.

Game 2 of the Eastern Conference Championship at Wayne Fleming Arena starts at 6 p.m. Saturday. The series will move to Edmonton on Monday at Rogers Place.

The Ukrainian Canadian Congress wants Russia expelled from the G20. The group's president, Alexandra Chyczij, has written to the prime minister asking him to lead a global campaign to expel Russia from the forum of leading economic nations.

How an increasingly popular supplement landed a man in the hospital

A British man's overdose on vitamin D is a cautionary tale for people who are considering adding supplements to their lives, according to a paper published Tuesday in the journal BMJ Case Reports.

As pandemic restrictions subside throughout Canada, medical professionals reflect on how the international health crisis has revealed the need to carry out discussions about dying.