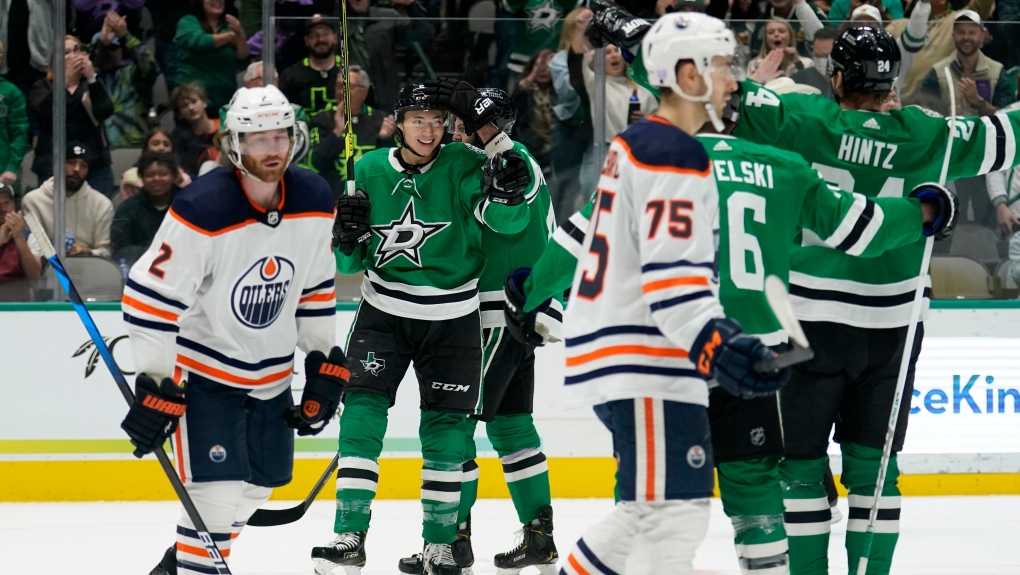 Red-hot Roope Hintz scored the first of two Dallas power-play goals in the first period, and the Stars handed the Edmonton Oilers just their fifth loss of the season, 4-1 Tuesday night.

Hintz has scored all six of his goals this season in the last six games, and this was his first on a power play. On Saturday, he had become the first Dallas Star to score two short-handed goals in the same game. Hintz added an assist Tuesday, giving him nine points during the six games.

His goal came on a twice-deflected shot by John Klingberg, off Alexander Radulov and Hintz in front of the net at 10:59. It was the first of three assists for Klingberg, equaling the total in his 12 previous games this season.

“It was good to see (Klingberg) get on the board on the power play,” Stars coach Rick Bowness said. “He was outstanding tonight on both sides of the puck.”

Stars goalie Jake Oettinger made 21 saves, improving his record to 3-0 in four games this season. He allowed only a goal by the Oilers' Ryan McLeod in the second period.

“Jake's rock-solid,” Bowness said. “He's very calm in the net, there's no rebounds, he reads the plays, swallows the pucks.”

Edmonton had a season-low 22 shots on goal, just four by the NHL's top two scorers - Leon Draisaitl (one shot) and Connor McDavid (three) in a combined 41:46.

“It's always fun to get a challenge like that,” Klingberg said. “(Draisaitl) scored a point there, but other than that we kept them pretty quiet.”

“It takes a group of five working together, everyone on the same page. You try to take away the middle of the ice, keep pushing to the outside. You keep them from going through the middle, they'll do a lot of damage.”

The Stars ended McDavid's streak of scoring a point in each of his first 17 games.

“We took time and space away from him,” Dallas defenseman Miro Heiskanen said. “We played him pretty hard, so it was hard to make plays. We played pretty well against him.”

Oilers coach Dave Tippett said, “We took a couple of penalties, got behind and chased the game. Against a heavy team like that, they're going to play in front of the puck all night.”

Hintz assisted on the Stars' second goal, passing cross-ice to Robertson for a wrist shot from the right faceoff circle that beat goalie Stuart Skinner. He stopped 29 shots, one on a breakaway by Michael Raffl in the last minute of a first period that ended 2-0.

The third Dallas goal, at 9:27 of the second, wasn't officially on the power play, but Gurianov scored it 4 seconds after Edmonton's third penalty. He skated in from the left, put the puck on his backhand and slid it past Skinner.

In the third period, Glendening redirected Ryan Suter's shot with his stick waist high into net.

Despite end-to-end skating early in the game, neither team put a shot on goal until 6:04 of playing time, when Oettinger stopped a wrist shot by Edmonton's Evan Bouchard. Skinner's first save came 43 seconds later on a tip-in attempt by Hintz.

NOTES: Dallas had just two penalties, the second with just 20 seconds to play. ... The 23-year-old Oettinger and Skinner, 22, began this season in the AHL. Oettinger was playing in his 33rd career NHL game, Skinner in just his seventh. ... Draisaitl, who assisted on McLeod's goal, has 10 points (six goals, four assists) in the last six games. ... Ryan Bowness, the Pittsburgh Penguins' director of professional scouting and son of Dallas coach Rick Bowness, was among the scouts at the game. ... A melancholy father-son remembrance was the pre-game puck drop by Dallas Cowboys color commentator/former quarterback Babe Laufenberg to honor Luke Laufenberg, who died of cancer at age 21 in 2019.