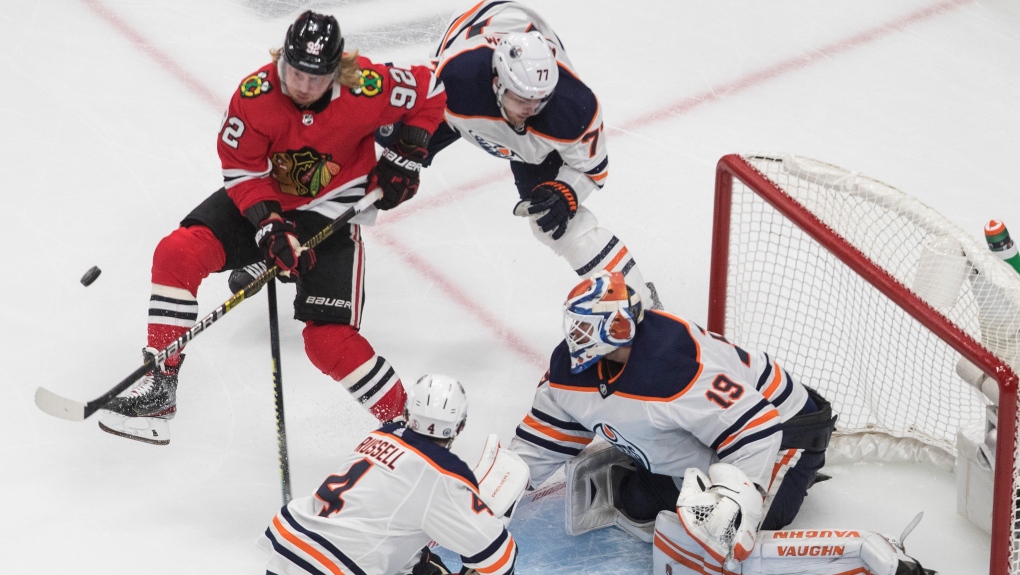 EDMONTON -- The Chicago Blackhawks bounced the hub-city host Edmonton Oilers out of the NHL's post-season tournament Friday, beating them 3-2 at Rogers Place.

The Blackhawks won the best-of-five qualifying series 3-1 and now move on to the round of 16.

The Oilers were expected to beat Chicago, given they were the fifth-seeded team in the Western Conference tournament and the Hawks were the bottom seed at 12.

Edmonton was also led by Connor McDavid and Leon Draisaitl, the top two scorers in the league during the abbreviated regular season.

The Oilers scored 45 seconds into the game on their first shot.

McDavid fed the puck from the boards to Archibald as he streaked through the slot. Archibald redirected the puck up and over the left shoulder of Chicago goalie Corey Crawford.

Edmonton was without top-pairing shutdown defenceman Adam Larsson for a second consecutive game (deemed “unfit to play”) and it showed when Chicago scored the next two goals off point shots, catching the Oilers defence running around.

At 5:16, Saad pounced on the puck from a rebound off a Connor Murphy shot, swooped around the net, - with Edmonton defenceman Oscar Klefbom draped all over him - and slid a backhand wraparound shot past goalie Mikko Koskinen.

Less than three minutes later, Highmore, standing unmolested in front of the net, redirected a Duncan Keith point shot past Koskinen and in.

Nugent-Hopkins tied the game two minutes into the second period, shovelling the puck past Crawford on a goal-mouth scramble.

Edmonton's defensive troubles worsened in the second period when Blackhawks forward Alex DeBrincat drilled Ethan Bear head first into the boards from behind. Bear went to the dressing room and DeBrincat was assessed a five-minute major for boarding.

The winner came midway through the third, when Hawks captain Jonathan Toews outmuscled Bear for the puck beside the Oilers net, then fed the puck to Kubalik for a one timer over the short-side shoulder of Koskinen.

The Oilers made a late push but took a too-many-men penalty with two minutes left when there was bench confusion after Koskinen started heading off for an extra attacker but then stopped and stayed on the ice.

Crawford made 41 saves for the win. Koskinen stopped 25 in the loss.

The Hawks success was due to veteran leaders and scoring up and down the lineup. Toews had four goals and seven points in the series. Patrick Kane collected one goal and four points.

Rookie Kubalik had five points in Game 1 but was otherwise quiet until his game-winning a series-clinching goal.

Chicago had goals from nine different players in the series. Nine of the 16 goals came off blue-line point shots.

The Oilers suffered from a lack of scoring other than from McDavid, Draisaitl, and Nugent-Hopkins. First line winger Zack Kassian was punted to the fourth line after an ineffective Game 1. Rookie Kailer Yamamoto, a point a game player after being called up in January, was kept off the scoresheet in all four games.

The Blackhawks were by all rights done for the year, spiralling out of the playoff picture when COVID-19 pandemic forced the NHL to shut down regular season at the 70-game mark in mid-March.

However, they were one of the 24 top teams invited to play in the expanded conference post-season tournament, held in the hub cities of Edmonton and Toronto. All players have been isolating to avoid contracting COVID-19 and playing their games in otherwise empty arenas.

There was no home advantage to the Oilers in Rogers Place other than familiar surroundings. They had to share their home dressing room equally with other teams and isolate in a hotel like everyone else.

The Oilers have missed the playoffs for 13 of the last 14 seasons and four of the past five seasons since drafting McDavid first overall.

This report by The Canadian Press was first published August 7, 2020.