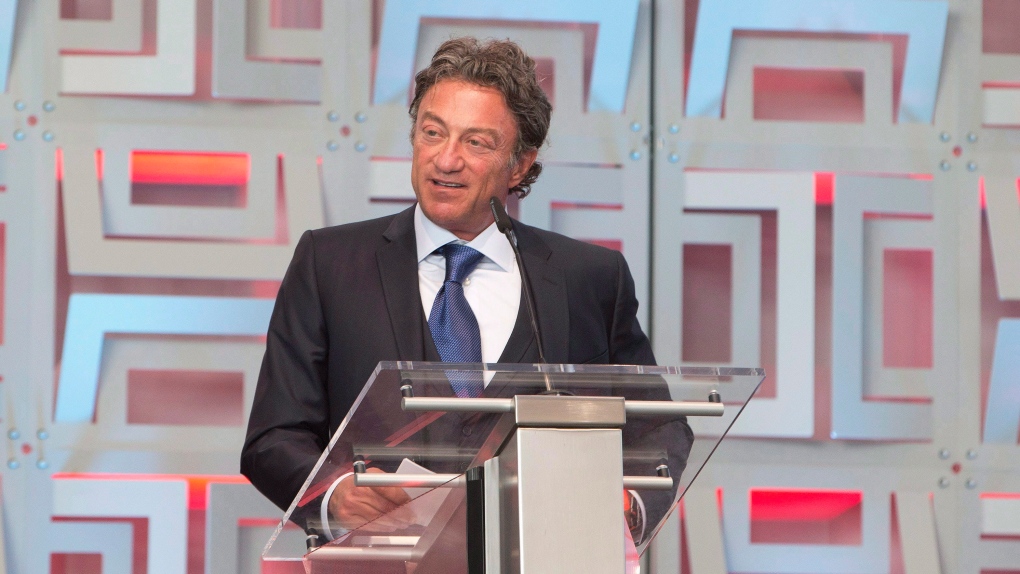 Editor's note: Daryl Katz' name was withdrawn from this lawsuit.

Edmonton Oilers owner Daryl Katz is denying ever paying a ballerina $75,000 for "sexual favours," as was alleged in a civil suit filed earlier this month in Nevada.

The lawsuit is a counterclaim filed by a prominent ballerina and her husband, Dusty and Mitchell Button, in response to allegations they committed sexual offences against young dancers under their wing.

The Buttons instead argue they are the victims of a coordinated attack meant to ruin their reputation, and allege that Sage Humphries, the initial complainant, was trafficked by her own parents to older men, including billionaire Katz.

In the court document, the couple's lawyers call Humphries a victim of statutory rape and say, "If Sage is truly the damaged flower she claims to be, the price should be paid – but it should be paid by those who actually engaged in illegal acts with her."

The allegations are largely unsubstantiated in the claim and remain untested in court.

According to the court documents, Humphries originally filed a complaint against Mitchell Button (who is also known by his middle name, Taylor) in the late summer of 2021, later adding Dusty Button as a defendant and several other dancers as complainants.

Dusty, having trained at the American Ballet Theatre in New York and the Royal Ballet School in London, joined the Boston Ballet in 2012, and was soon promoted to principal dancer, the counterclaim lays out. Prior to the allegations, she had amassed an online following of several hundreds of thousands thanks to high-profile media attention and being named Red Bull's first ballerina athlete.

Her husband is a former ballet instructor who pivoted to managing his wife's career and designing and building custom automobiles.

In a May Good Morning America interview, Humphries reiterated the allegation against Mitchell Button: after gaining control over a number of aspects of the young dancer's life under the pretence of managing her, she says he "violated" her for the first time during a movie night.

In their counterclaim, filed July 8, the Buttons instead say they had a "consensual 'throuple' sexual relationship" with Humphries after she turned 18, which she initiated.

"The relationship between Sage and the Buttons appeared, at the time, to be one of mutual love, affection, and respect," the counterclaim reads.

It also says Humphries "fabricated accounts of abuse and shopped them to the press in order to gain her own spotlight of attention and false victimhood to further her floundering dance career."

She and six other complainants "filed this case for the specific purpose of destroying the reputations of Dusty in the dance world and Mitchell in the car industry," the claim continues.

The Buttons also allege Humphries' parents "insisted" she live with them to save money, and knew and approved of the dancer's advances on the married couple believing it would be beneficial to her career.

The court document paints Humphries' parents as fame- and money-hungry manipulators who helped their daughter launder $75,000 paid to her by Katz.

The Buttons allege Katz was only one of several older men who had a sexual relationship eight years ago with Humphries. Katz is the only person they accuse of paying Humphries as a prostitute.

Filed with the counterclaim were undated screenshots of text messages supposedly between Humphries and Katz.

A contact called "D K" with a 780 area code – the telephone code most commonly used in northern Alberta – writes that an account with "25K" has been opened.

"I also told them to get you debit card and put some cash on it OR you won't buy yourself anything…..which I want you to do," D K texted.

In another text, D K asks, "If my guys send u funds will u spend it on/keep it for yourself?" 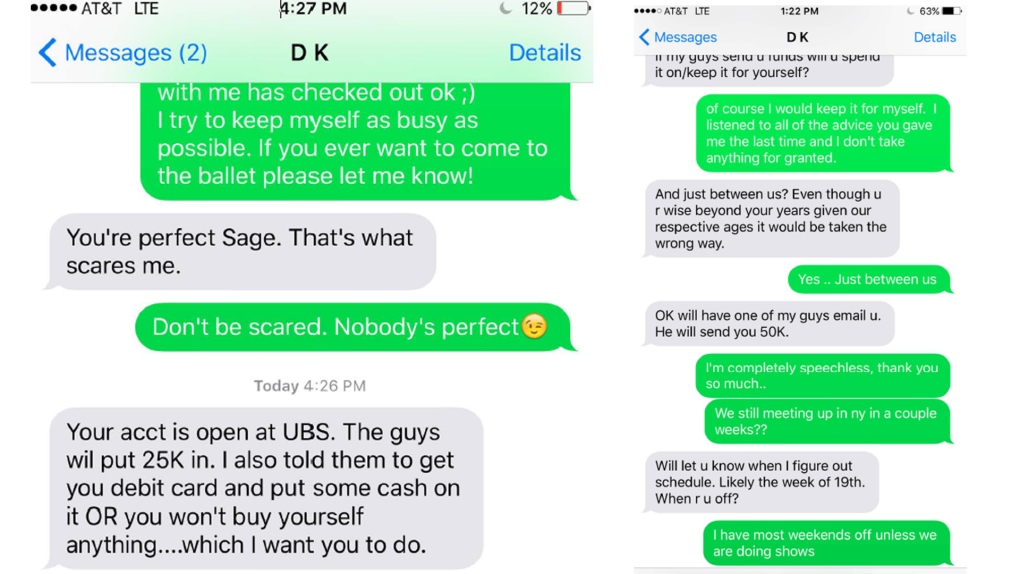 When Humphries – the Buttons allege – promises to keep it, D K asks her to keep the exchange private because "even though u r wise beyond your years given our respective ages it would be taken the wrong way."

Katz – who the counterclaim says was 53 years old when he paid Humphries – is now 61 years old.

His lawyer, Robert Klieger, on Thursday said the NHL team owner denies the allegations, ever having a sexual relationship of any kind with Humphries, and ever meeting the Buttons.

"Critically, the allegations against Mr. Katz are not being made by Ms. Humphries. The accusations are instead being made by the Buttons, who Ms. Humphries and six other women have accused of exploiting their position of power and influence in the dance world to sexually abuse young dancers across the country," Klieger said in a statement.

"Their false accusations against him are a transparent and pathetic attempt to distract attention from the abhorrent acts with which they stand charged."

His team did not address the texts Katz allegedly sent Humphries.

Of the messages, Humphries' lawyer told NBC News on Thursday, “I can’t say whether they’re legitimate at this point."

Sigrid McCawley said Humphries and Katz had a "business relationship," not a sexual one.

The two "had been discussing movie projects and that the dancer might have received money from the NHL executive in connection to that proposed business deal," she told NBC News.

In a statement to CTV News, an NHL spokesperson said: "We became aware this week of the civil lawsuit in which Mr. Katz is named as a third party by the defendants in the lawsuit. Mr. Katz has advised us that he categorically denies the allegations. We are in the process of looking into the matter."

The Buttons do not say in the counterclaim how they obtained the texts or how they came to believe the money was paid as compensation for "sexual favours," as they allege in their counterclaim.

They are asking to be compensated as their reputations have been "unjustly ruined."

Their lawyer Marc Randazza denied CTV Edmonton's request for an interview and more information, writing, "We are not interested in trying this matter in the press."

Randazza calls himself a "first amendment attorney" and is known as a commentator on Infowars and for representing Alex Jones, the conspiracy theorist who owns the program.

The Humphries' lawyer, Sigrid McCawley, said in a statement to CTV News that the Buttons' counterclaim serves to "distract and distort the truth."

"The counterclaims the Buttons have filed falsely and recklessly implicate others, including Daryl Katz, and are a factually unfounded attempt to portray the women they abused as liars," McCawley said. "The women I represent who have bravely come forward are telling the truth. We are confident the Buttons will be held accountable."

In the spring, Humphries told Good Morning America she had returned to the Boston Ballet, which she joined in 2017.

A previous version of this article included references to Humphries being 17 at the time of the interactions, a claim made in the civil suit in Nevada. A copy of Humphries drivers’ license has been provided to CTV News, indicating that she was 18 at the time.

World chess champion Magnus Carlsen said on Monday he believed Hans Niemann had "cheated more - and more recently - than he has publicly admitted," adding he no longer wanted to play against the American and any rivals who repeatedly cheated in the past.