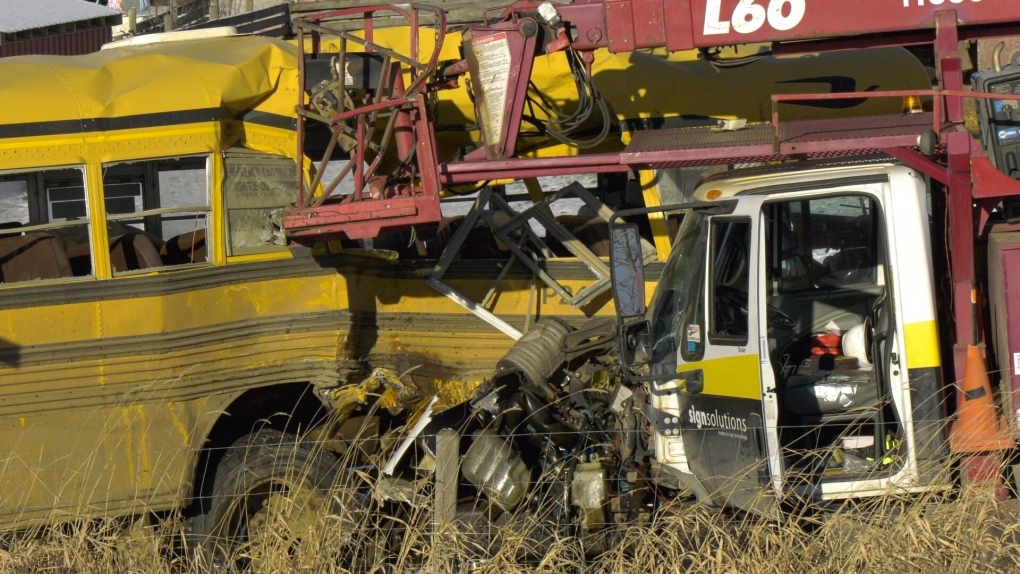 A school bus and a crane were involve in a crash north of Edmonton on Dec. 2. (Jay Rosove/CTV News Edmonton)

EDMONTON -- A GoFundMe page has been launched for the families of the students injured in a school bus crash northeast of Edmonton on Monday morning.

According to RCMP, the bus was heading north on a rural road about five kilometres west of Smoky Lake when it was involved in a crash with a crane that was travelling westbound on the highway.

Witnesses told police that the bus had stopped at a stop sign, then started crossing the highway when the collision happened.

“It was T-boned on the loading side - that's opposite obviously of the driver - right near the back axle or right in front of the back wheel,” RCMP Cpl. Ronald Bumbry said in an interview Tuesday.

Police say there were no fatalities as a result of the crash, but eight people were hospitalized and five suffered critical injuries. All of the critically injured patients were transported to hospital in Edmonton.

Students on the bus are reported to be between the ages of six and 16.

Shelby Henry, who started the fundraiser, says money raised will help the families be with their loved ones after the crash.

“Smoky Lake is about an hour and a half away from the Stollery, so travel expenses, meals, hotels, childcare, etc, all adds up quickly. It’s unclear how long these kids will be in hospital and anything that we can do to make this time a bit easier is what the community wants to do.”

Police say both drivers have since been released from hospital, and a passenger in the crane was not injured.

As of Tuesday, no charges had been laid.

“The RCMP collision analyst was on scene taking various data and evidence from the scene there and the investigation does continue,” Bumbry said.

He said there didn't appear to be anything blocking the view at the intersection and road conditions were clear at the time.

“We can't speculate at this point as to what transpired,” he said. “Inspections will be done on both vehicles to determine whether they were road safe.”

Police are also looking at the training of both drivers. The investigation could take two to three weeks.

Bumbry also said it’s hard to say if seatbelts on the bus would have prevented any injuries in the crash.

“It's impossible to say in these types of collisions.”

The company that owns the crane has also launched an internal investigation into the cause of the crash.