A Red Deer man is being thanked for helping Oilers fans who travelled all the way from Ontario get to Edmonton in time for Game 3 of Round 2.

Few people know how to fix a broken-down coach bus, but on May 20, all Kirk Als and his friends needed was Perry.

After watching the Oilers bounce back in their second game against Calgary, Als, his son Adam, and his friend John Cochrane jumped on the bus to head 300 kilometres north on the Queen Elizabeth II Highway.

The coach broke down in Red Deer, literally in the middle of the Battle of Alberta.

"We thought, 'Oh man, it's a long weekend. We're never going to get there. Our dream of getting to a game in Edmonton is not going to happen," Als recalled in an interview with CTV News Edmonton on June 4, before the Oilers faced off against Colorado for the third time. 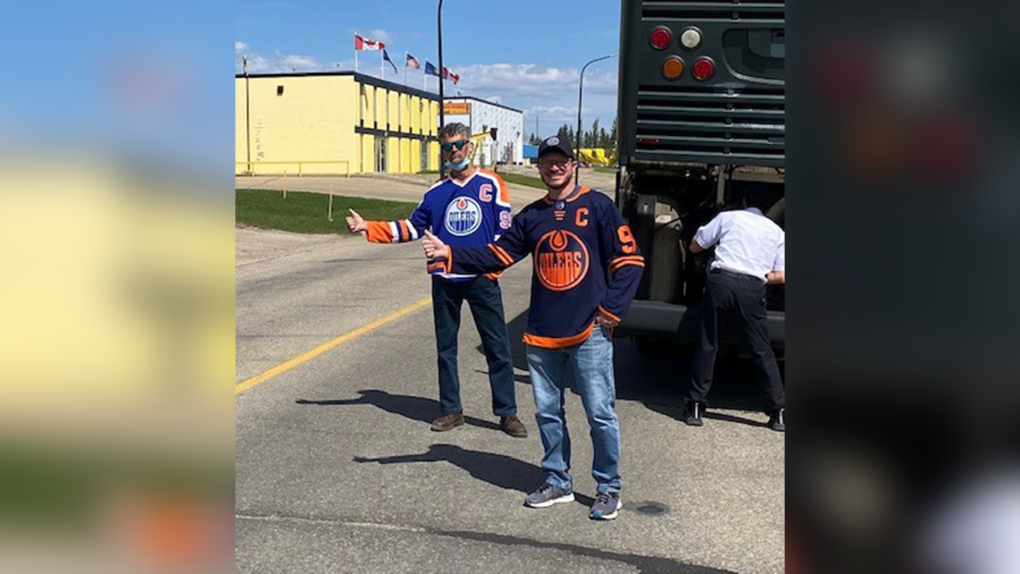 Kirk Als, left, and his friend John Cochrane, right, pretended to hitch hike after their bus broke down right in the middle of Battle of Alberta -- literally, in Red Deer, Alta. -- on May 20, 2022, on their way to Oilers vs. Calgary in Edmonton.

"Some stroke of luck – fate, karma, whatever – he was a coach bus mechanic," Als said.

"After two years of tough times, it was surreal that some dude stops out of the goodness of his heart, fixes a bus, no tools … and sent us on his way." 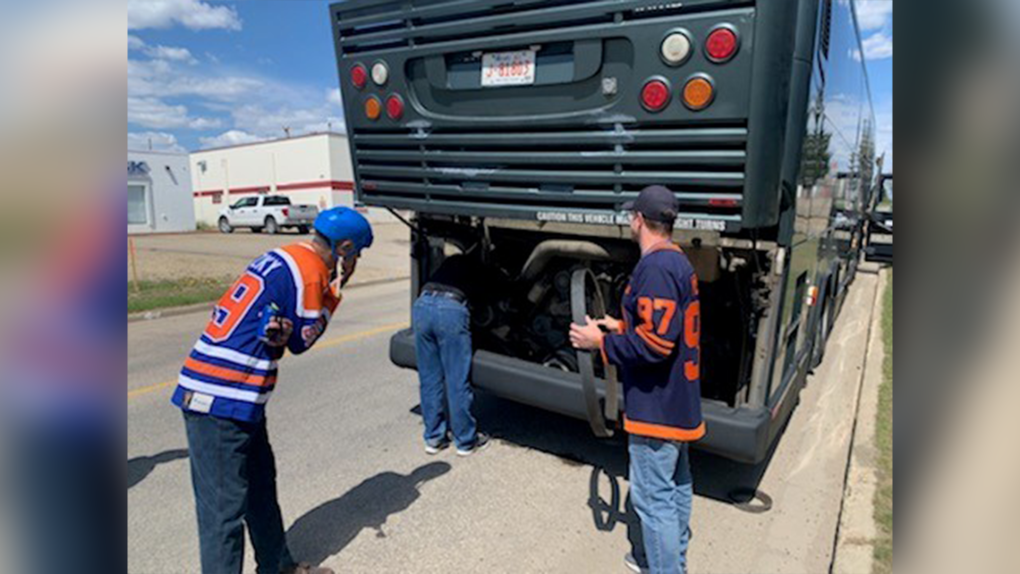 Kirk Als, left, and his friend John Cochrane, right, look on as Perry from Red Deer, Alta., examines their broken-down coach bus on May 20, 2022.

The game in Edmonton had been especially important to the Ontarians.

"When your kid is sick and in the hospital, and we're not sure why and there's no diagnosis and all he wants to do is hold your hand because he's afraid and we're afraid, and we really weren't sure if he was going to survive – that's the scariest," Als told CTV. 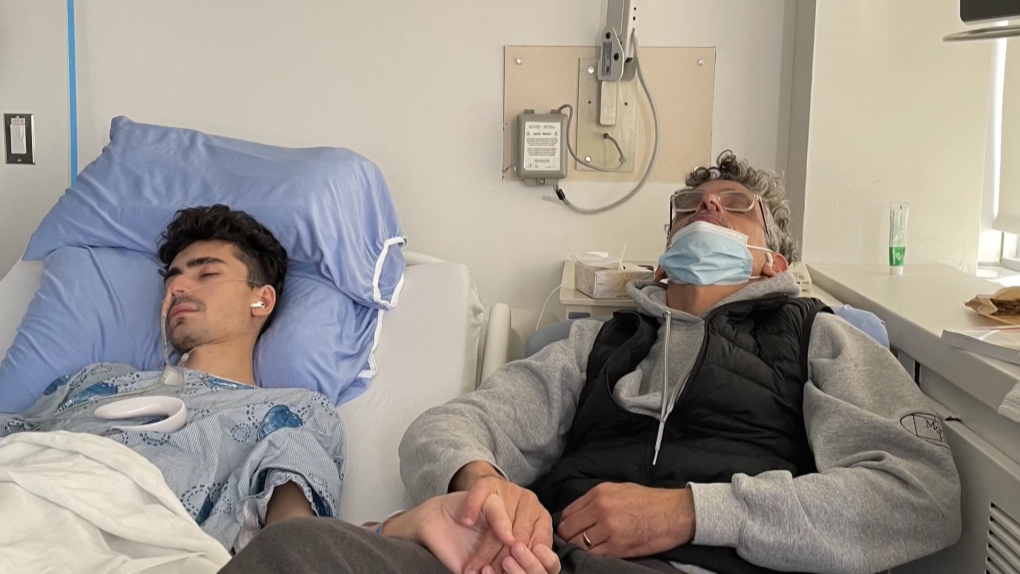 Adam Als became suddenly acutely ill in November 2021 and was hospitalized and needed emergency surgery. In thanks of his friend's support, Kirk Als promised to take Oilers fan John Cochrane to a game in Edmonton.

"It was the darkest time in our family life and we had such great support from friends and family."

Much of the support came from Cochrane, who brought meals to Als and spent time with him in the hospital.

After Adam recovered, Als said to his friend, a diehard Oilers fan, "I want to take you to an Oilers game in Edmonton."

"It was simple," Cochrane shrugged, reflecting on Adam's time in the hospital. "I got an Arby's burger. I brought it to the hospital. We sat down in the cafeteria, sat together just for a few hours. I grabbed over a few pints. We sat in the parking lot and had a pint with him.

"It allowed each of us – more him than me – to cry and feel bad about his son and pray and hope that he got better."

The St. John's native has been an Oilers fan since the team became part of the league.

"Since Wayne Gretzky came on the scene," he says. 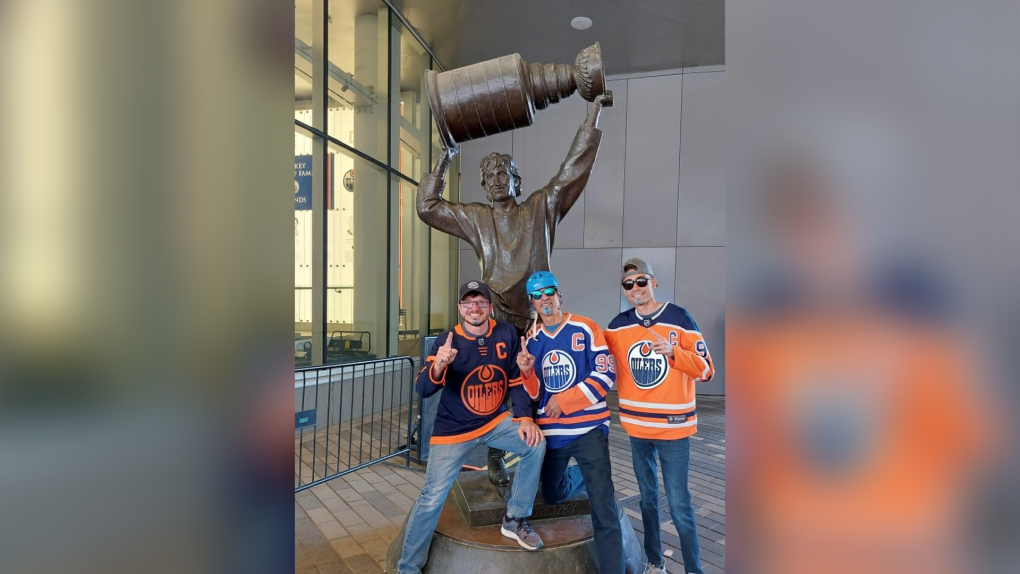 From left to right, John Cochrane, Kirk Als, and Adam Als pose for a picture with the Wayne Gretzky statue outside Rogers Place in Edmonton, Alta., on May 20, 2022.

The May 20 game was a lifelong dream realized.

Als and Perry are "text buddies."

When the trio returned with more friends for Edmonton's series against the Avalanche, he invited the Red Deer man to a game.

"Salt of the earth guy. He works six days a week," Als said.

"So shout out to this guy who had a random act of kindness to get these jokers to an Oilers game when he really didn't have to."

Not only that, but Perry's wife volunteered him to drive the Ontarians to Edmonton if he couldn't fix the bus.

"That's a two-hour drive," Cochrane pointed out. "I mean, there's great people everywhere. And it's so good when you can see just great people."

The experience has solidly made Oilers fans of the Ontarians. 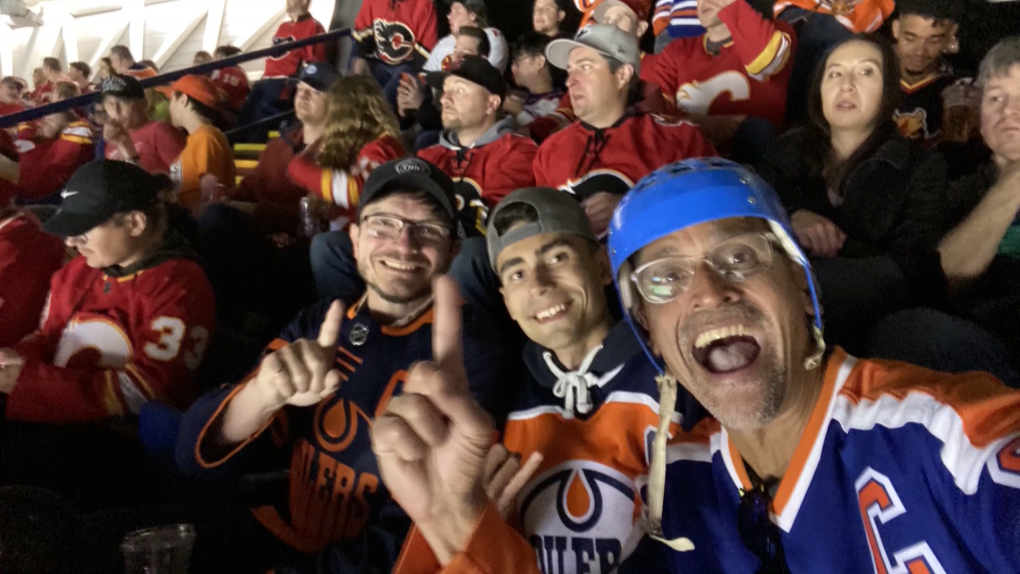 From left to right, John Cochrane, Adam Als and Kirk Als pose for a picture in Rogers Place in Edmonton during the Oilers and Flames' third game in Round 2 on May 20, 2022.

"I've fallen in love with the team. When you're there for Games 2 and 3, and you see Smitty come off from injury after being smoked by Lucic and the crowd is going crazy as he comes back on the ice, how can you not be cheering for this great team?" Als wondered. "Unless the Oilers are playing the Leafs, we're cheering for the oil, for sure."

"Hockey's great for bringing people together."

The Oilers and Avalanche face off in Game 4 in Edmonton Monday night. Colorado is leading the series 3-0.