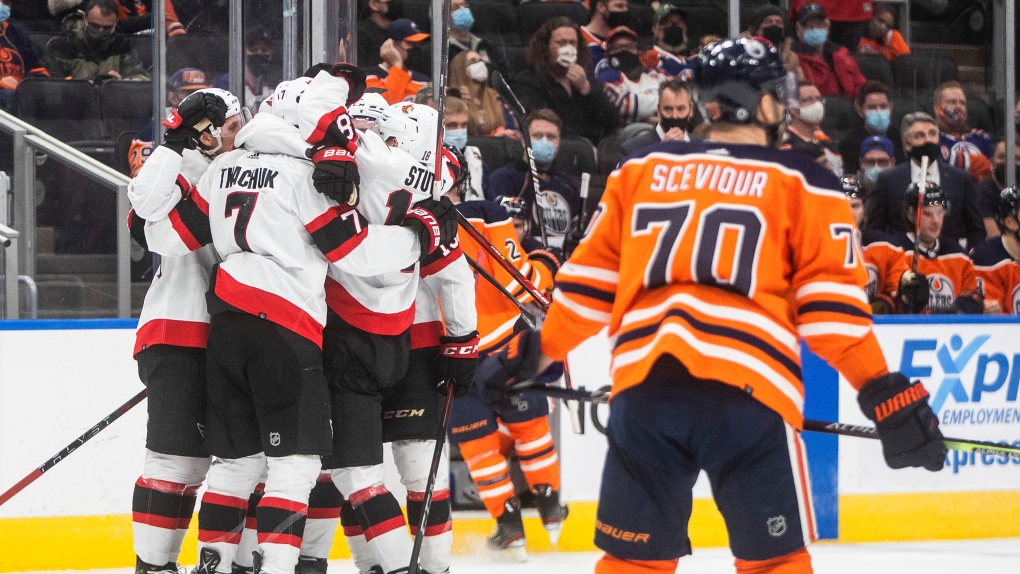 Scoring five third-period goals may not be the usual game plan, but it was the perfect path to a win for the Ottawa Senators on Saturday.

Josh Norris scored a pair of goals and the Senators erased a 3-1 third-period deficit in a 6-4 come-from-behind victory over the Edmonton Oilers.

Adam Gaudette, Alex Formenton, Artem Zub and Zach Sanford also scored for the Senators (11-18-2), who have won two straight and won their first game this season when trailing after the second period.

Gaudette, who also had an assist, said the comeback was a blast.

“It was a lot of fun. Personally it's been a while since I've had that much fun playing hockey,” he said. “It's been a tough year and a half or so, so it really feels good to contribute and to help this team win.”

Zack Kassian, Kailer Yamamoto, Brendan Perlini and Darnell Nurse replied for the Oilers (18-15-2), who are still in a free-fall. They have dropped six straight and are 2-10-2 in their last 14 games.

“That is one we let slip away,” Kassian said. “Everybody is pretty upset. We were pretty frustrated with that one. That's a tough way to lose. You are up 3-1 going into the third and you lay a stinker. We are a pretty frustrated group. I think the writing is on the wall.”

The Oilers were once again guilty of allowing the first goal of the game. Ottawa scored a power-play marker midway through the first as Norris was left alone in front to send a shot past Skinner. The Oilers have conceded the game's first goal 22 times in their last 26 games.

Edmonton knotted the game with a power-play goal of its own with just 48 seconds remaining in the opening period as Leon Draisaitl won a board battle and fed it in front to Kassian, who wired a shot past Murray.

The Oilers made it 2-1 with eight minutes left in the middle frame as Yamamoto fought off Erik Brannstrom and slid a backhand shot under Murray while off balance.

The Oilers added to the their lead with two and a half minutes to play in the second as Perlini added some extra weight to a Duncan Keith shot for his third of the season.

Ottawa got one back early in the third on a two-on-one as Gaudette beat Skinner with a high backhander.

The Senators tied it up five minutes into the third period as Skinner coughed up a puck behind the net, eventually leading to a rebound goal by Formenton.

Ottawa's unlikely comeback saw them regain the lead midway through the third when Zub picked the top corner with a long shot.

However, the Oilers were able to draw even two minutes later as Nurse jumped up to score on a wrist shot.

The Senators came roaring back with another power-play goal as Norris scored his team-leading 16th goal of the season.

The Senators return home to face the Buffalo Sabres on Tuesday, while the Oilers are off until Thursday when they host the Florida Panthers.

NOTES: It was the Oilers' first game in 10 days. Edmonton enjoyed a ton of success against Ottawa in the all-Canadian division last season, winning all nine games against the Senators while outscoring them 41-17 in the process.

This report by The Canadian Press was first published Jan. 15, 2022.