EDMONTON -- Parents across the province are protesting the province's back-to-school plan on Friday.

According to organizers, they are concerned that school boards are not being provided with enough money to ensure student safety as they return to the classroom.

These parents are worried about how schools will maintain physical distancing.

"We really want to see some meaningful consultation and a cap on class sizes," parent and organizer Stacey Speta said. "Fifteen per class, hire the staff to make that feasible, look at using unused or vacant office buildings or universities." 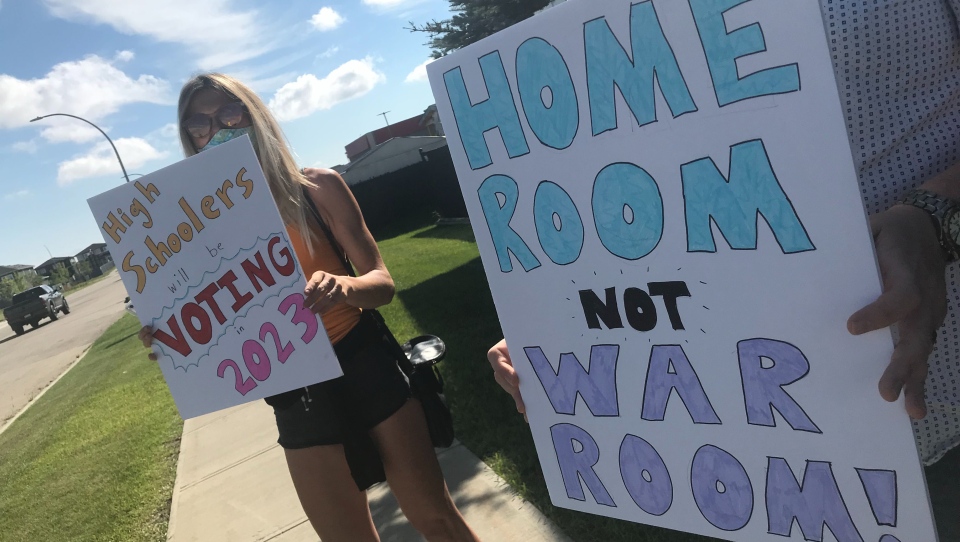 Kaycee Madu, Edmonton's only UCP MLA, came outside to acknowledge the protesters.

"They've got their views, the fact is that we relied on the advice of the chief medical officer of health and health care professionals who made the recommendation to mandate masks from Grade 4 to Grade 12," Madu told CTV News Edmonton.

School boards were given guidelines for how to reopen during the pandemic, including staggering start times, having student cohorts, and having regular cleaning, screening and sanitization.

Students with symptoms of COVID-19 will be required to get tested and only be allowed back into class after a negative result, according to Alberta's chief medical officer of health.

Each student, teacher and staff member in the province will be given two reusable face masks. Staff will also be given one face shield each to be used at their discretion. Single-use masks, hand sanitizer and contactless thermometers will also be provided by the province.

According to LaGrange, the province is spending $10 million on the new supplies, in addition to the $120 million funding increase that was previously announced.

There was a protest outside the education minister's Red Deer office earlier this week. Dozens of parents carried signs and flag, demanding the province do more to support students, including those with special needs.

The Alberta Teachers' Association is asking the province to delay the start of the school year. President Jason Schilling says teachers and school staff need more time to prepare.