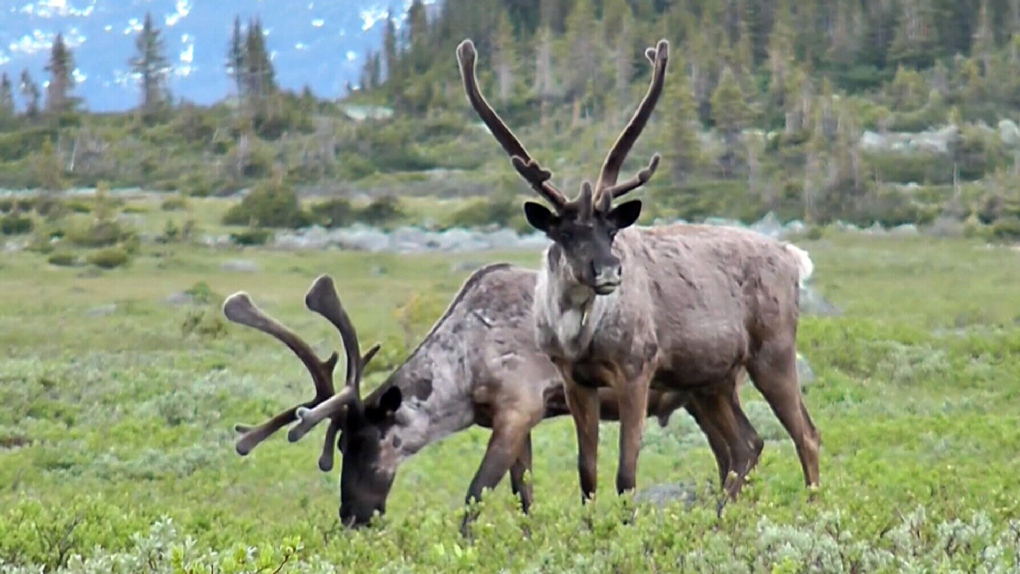 The proposal suggests the captured breeding females could produce up to 20 animals a year. At that rate, it would take at least a decade to bring Jasper's herds back to self-sustaining levels.

EDMONTON -- Caribou herds in Canada's Rocky Mountains are now so precarious that Parks Canada is preparing a plan to round up females from nearly vanished herds and pen them in a captive breeding program to replenish others.

The highly invasive move is hinted at in an email distributed last week.

“Parks Canada has been investigating the feasibility of developing a caribou conservation breeding program and is now at the point where a proposal will undergo a review by external experts,” the email said.

A draft of the plan dated 2017 is outlined in documents obtained by The Canadian Press.

It proposes taking females from herds in Jasper National Park that are too small to survive -- fewer than 10 animals -- and pen them in a facility near the town of Jasper.

Those animals would be augmented by caribou from other herds until there are about 40 females and five males in a highly managed and monitored area of about one square kilometre, surrounded by an electrified fence.

The proposal suggests those breeding females could produce up to 20 animals a year. At that rate, it would take at least a decade to bring Jasper's herds back to self-sustaining levels.

The facility could also be used to restore herds in Banff National Park.

“We expect a captive herd for breeding purposes could start producing animals for release as early as 2024,” he said.

Caribou expert Stan Boutin of the University of Alberta called the program risky.

“There's lots of things that could go wrong,” he said.

There's no guarantee that caribou yearlings raised in captivity would survive in the wild.

“We need to go into this eyes wide open that there will be animals that we have just spent time and effort breeding that will become prey,” said Argument.

“We're taking a wild animal and putting it in a pen. The breeding population in the pen may spend the rest of their life in captivity. That's a significant change that many people might view as being a step too far.”

But desperate times call for desperate measures, said Boutin, who has proposed a similar, less radical plan to pen pregnant caribou cows until after they calve.

“(Parks Canada) have done their homework,” he said.

Boutin said there's no point in lamenting the need to treat wild animals as semi-domesticated.

“Nothing's natural any more, given how we've changed the system.”

Parks Canada has been criticized for failing to close access roads and backcountry in the winter to protect Jasper's herds, as well as for approving an expansion of the Marmot Basin ski area.

But Argument said the problem in Jasper began when managers began encouraging the growth of elk herds. That resulted in larger wolf packs, which eventually turned their attention to caribou.

Wolf density in Jasper is now low enough to give caribou a chance, said Argument.

Officials all over Canada are struggling to preserve the country's caribou herds, almost all of which are collapsing largely due to increasing pressure from resource development and backcountry access.

Last week, the federal and Alberta governments released a plan to protect the animals. But those plans were criticized for failing to provide any interim measures while officials take up to five years to designate protected areas.

“We need on-the-ground protection of the caribou and bison on our traditional lands,” said a statement from Allan Adam, chief of the Athabasca Chipewyan First Nation.

“We are disappointed that the federal government did not act on the recommendation for a protection order.”

Argument acknowledged the captive breeding plan for Jasper has never been done before on this scale.

But it may be the last chance to keep them on the landscape.

“It's such an important undertaking,” Argument said.

“If we make a mistake, we may only have the one chance. They are down to such low numbers.”

This report by The Canadian Press was first published Nov. 2, 2020.