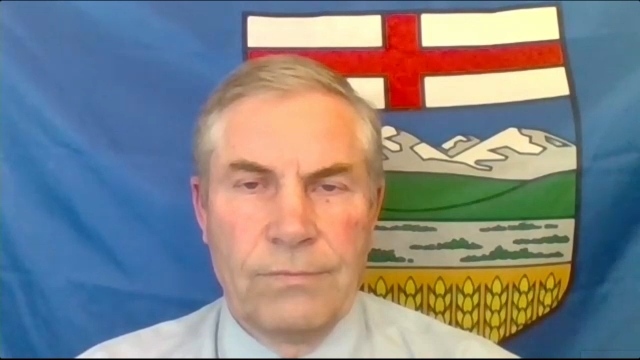 Paul Hinman in an interview with CTV News Edmonton on June 28, 2022.

A man who insists he's still the leader of an Alberta separatist party says an effort to push him out, amid allegations of theft, is being led by "agents" who have infiltrated the board.

A statement on the website of the Wildrose Independence Party of Alberta (WIPA) states that the leadership role was vacant as of Monday, but Paul Hinman says the job is still his.

"We have a board that's gone AWOL. They've hijacked the party, they're contravening all of our bylaws, and procedures and policies, and it's just wrong. They can't do that," Hinman told CTV News Edmonton Wednesday night.

The post does not say why Hinman is no longer leader. An email to board president Rick Northey and the party's communications account was not responded to.

"Under the Party bylaws, the Board of Governors has the duty of appointing an Interim Leader and will make an announcement within the next seven days," WIPA's website stated.

Hinman believes the board voted in favour of removing him, but insists that's not the proper process. He said allegations he took party money he wasn't supposed to are false.

"Where's the evidence on this? You can make allegations against anybody but you have to bring the evidence and not just say, 'Oh, he stole money.' That has no credibility in any court," he said.

The party is set to meet on July 23 in Red Deer for an annual general meeting. Hinman has spoken to his lawyer, and is hopeful he'll have a chance to state his case to members at that meeting.

When asked why he's being pushed out, Hinman said some in political circles don't like the party's stated goal of independence for Alberta.

"There's a lot at stake if Alberta was to rise up and say, "We don't want to be part of this anymore," Hinman said.

"I think there's a lot of nefarious activities going on to undermine our movement and we have implants, plants, agents inside our board, I believe."

Hinman finished third in a March byelection in Fort McMurray-Lac La Biche with 11 per cent of the vote.

The party raised $114,829 in 2021, according to statements filed with Elections Alberta.

Survival 'the only concern' as Canadian tenants struggle to pay rent

A new study has found that three drugs, including the antiparasitic ivermectin, had no significant effects in treating low oxygen levels or preventing ER visits, hospitalization or death due to COVID-19.