On Wednesday, Air Products Inc. announced it has signed a memorandum of understanding with all three levels of government to pave the way for the new hydrogen production facility.

The site would produce hydrogen-fueled electricity and liquid hydrogen for international markets.

According to Air Products Inc., if all goes to plan, the "landmark" site will be operational by 2024.

"This project will make Alberta's capital city the centre of the country's hydrogen economy," said Kenney, "and lay the foundation for Air Products to operate the world's most competitive and lowest carbon intensity network."

"I specially chose my Grandpa Larry's cufflinks," he said. "He came here and my dad's family was brought to this region by that great energy boom."

"I believe this clean hydrogen energy boom will be what secures the prosperity for Larry's great grandkids, kids and all of our kids who can have a future in the energy business while solving the world's climate challenges," added Iveson. 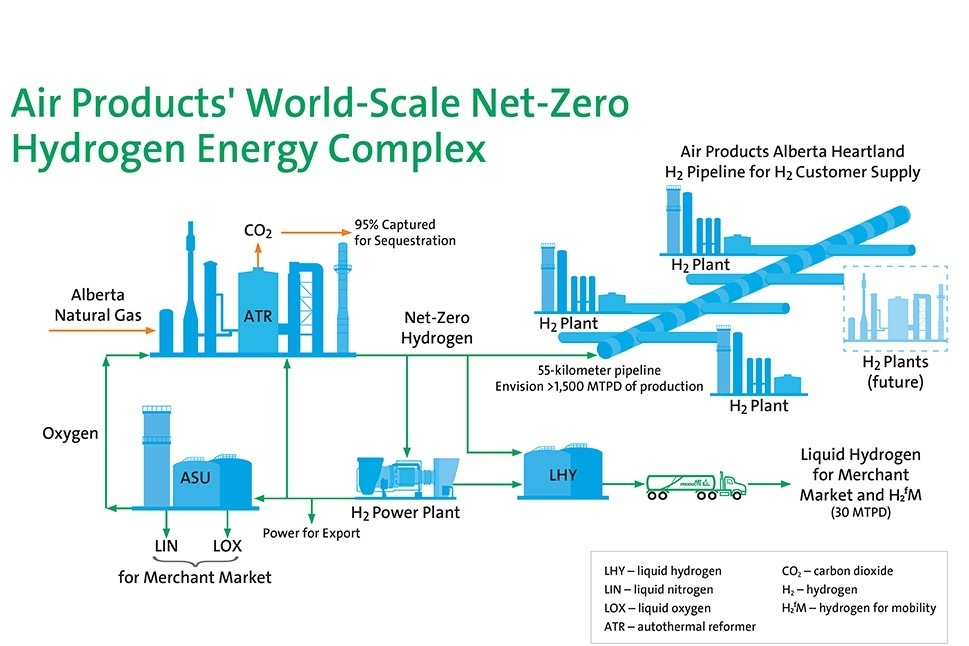 The announcement of the new hydrogen facility came on the same day as an agreement by Canada's largest oilsands producers to achieve net-zero greenhouse gas emissions by 2050. The 'Pathways to New Zero' effort involves Canadian Natural Resources, Cenovus Energy, Imperial, MEG Energy and Suncor Energy in collaboration with the federal government and government of Alberta. Those five companies account for 90 per cent of production in Canada's oilsands.

Richard Masson has more than 30 years of experience in energy project development and governance and is also first vice chair of the World Petroleum Council-Canada. He told CTV News Edmonton the two announcements "are different, but they are very much related."

"(The oil companies) have worked together to share technology to move the industry forward, so they're now going to do that with reducing greenhouse gas emissions, and I think that is a very powerful thing where they're all aligned toward 2050 net zero performance," the energy expert said.

"Then the Air Products announcement is really interesting as well because hydrogen has the potential to be one of these fuels that we can do on a zero net basis," said Masson. "This is called blue hydrogen. We're going to use natural gas as the feedstock, and use carbon capture and storage to take the CO2 and put it in the ground so it never hits the atmosphere."

Masson pointed out that the new plant would also provide opportunities for hydrogen vehicles in the region.

"Without having a supply," he said, "you're not going to get the vehicle to be on the road. So this is a key building block for that transition."

Last month, Suncor Energy and ATCO Ltd. announced they would work together on a potential hydrogen project near Fort Saskatchewan, Alta.

Masson says Wednesday's hydrogen plant announcement is yet another step toward net zero emissions in Alberta.

"Alberta is blessed in a lot of ways," he said. "The oilsands are the third largest resource in the world. We've demonstrated that we have 15 projects that operate very successfully. We know where they are, there's no exploration risk, they're connected to market already - and so now we can work on reducing the carbon intensity of those things."

“The Pembina Institute was contracted by Air Products to conduct an independent assessment of the greenhouse gas emissions of the proposed Air Products Alberta Blue Hydrogen Hub project," his statement read in part.

“The project will produce hydrogen using next generation auto-thermal reforming technology and best-in-class technology to minimize emissions from plant operations, including carbon capture with a 95 per cent capture rate and on-site generation of electricity using a hydrogen-fueled power plant. This is a major improvement over traditional hydrogen production facilities in Canada today and sets a high standard for new hydrogen production from natural gas."

In a news release, Air Products Inc. stated that the new facility would set the stage for the most competitive and lowest carbon-intensity network in the world.

A shooting at a Copenhagen shopping mall on Sunday left several dead and injured, police said. The suspect, who is in custody, is a 22-year-old Danish man who was detained near the Fields shopping mall, said police inspector Soren Thomassen, head of the Copenhagen police operations unit.