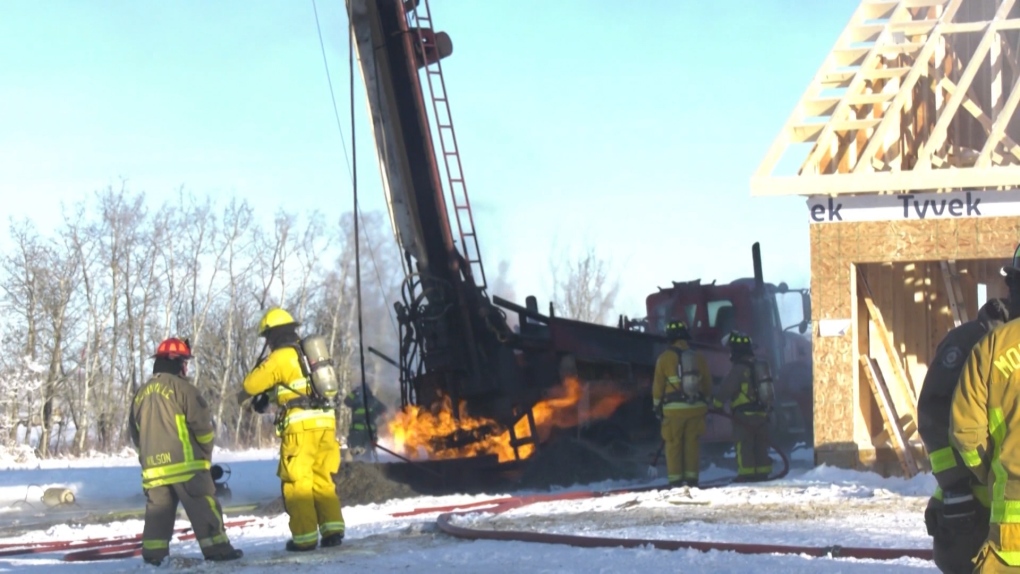 A fire near Morinville was caused by a drilling rig hitting a pocket of natural gas underground. Dec. 15, 2021. (Darcy Seaton/CTV News Edmonton)

A fire north of Edmonton was caused by a drilling rig hitting a pocket of natural gas underground, according to officials.

Around 1 p.m. Wednesday, a rig was drilling a water well on a property near Morinville where a home is being built.

At 300 feet below ground, it hit a pocket of gas, sparking a fire that engulfed a truck above.

"I've been in the fire service for over 20 years and I've never seen an instance like this," said Sturgeon County Fire Chief Pat Mahoney.

Officials said there are no pipelines in the area.

"I've seen natural gas pipelines or lines around dwellings, but never something like this where a water well is being dug and they've struck what we believe to be a natural pocket of gas and it ignited," Mahoney told CTV News Edmonton.

No one was hurt in the incident and the home under construction wasn't damaged.

The fire burned itself out around 1 a.m., according to county officials.

Sturgeon County has contracted an oil and gas blowout recovery team to tackle the gas that is venting from the well. From their preliminary work, the industry experts believe the gas is methane being released from a coal seam.

As of Thursday morning, they were preparing to pump a heavy mud and concrete mixture into the well before capping it.

Crews were expected to be on the site for the remainder of the day.

The source of the gas is still under investigation.