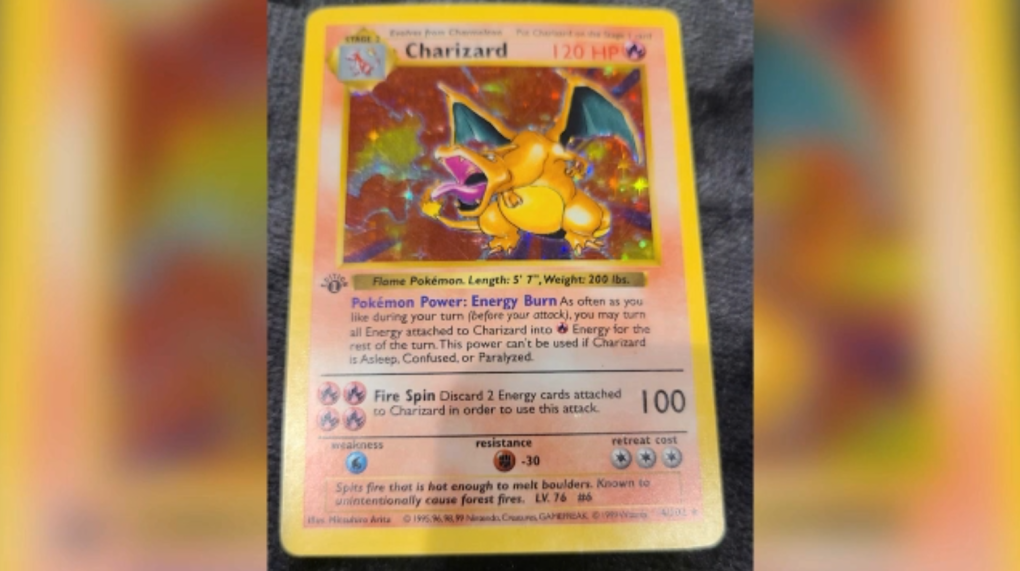 An Edmonton man sold this Charizard Pokemon card for $8,000. (Supplied)

EDMONTON -- An Edmonton man is $8,000 richer thanks to his childhood love of Pokemon.

Seth recently sold his first-edition Charizard Pokemon card for $8,000. He told CTV News Edmonton he’s had the card for about eight years.

“Those cards were nostalgic for me and I had more money than I did when I was a 10-year-old kid, so I was on Kijiji one day and I saw this guy was selling a binder full of cards, and I thought, ‘What the heck, it looks like there are some good cards in there,’” he said.

He spent about $200 on the full binder of cards, which included the Charizard. At that point, he estimates the card was worth about $500.

“I thought about selling it over the years for about $500 but luckily I didn’t. I held onto it, and so glad I did.”

As the value of the card grew, Seth said he though about selling it on eBay, but held off, and eventually found a buyer in the Edmonton area.

“The idea of shipping a card of that value kind of scared me a little bit. If anything went wrong, it wouldn’t be good. So instead I had listed some cheaper cards on Kijiji and that’s how I ran into this buyer.”

Seth’s card wasn’t in mint condition, but he says first-edition Charizard cards that are can sell for much more money.

“I can thank the pandemic for inflating the prices of these cards because people are bored at home.”

This weekend marks 25 years since the Pokemon franchise was introduced for the first time in Japan.