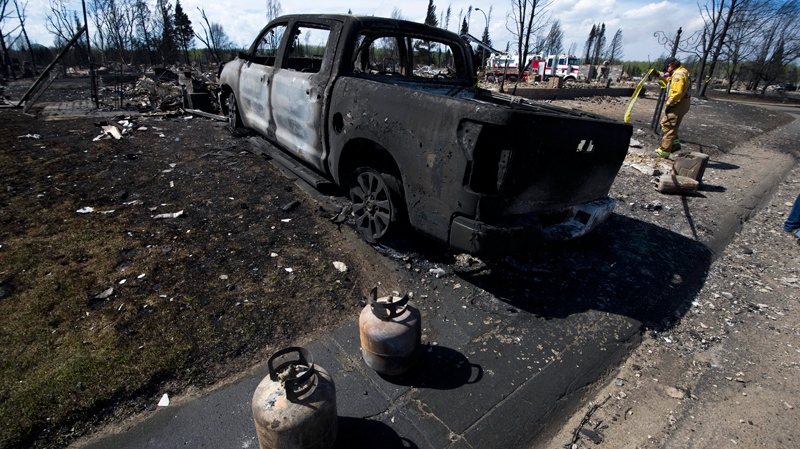 Crews work to shut off gas and water in a burned-out neighbourhood in Slave Lake, Alta., on Wednesday, May 18, 2011. (Ian Jackson / THE CANADIAN PRESS)

Several months after a massive wildfire tore through the Town of Slave Lake, RCMP investigating the blaze are asking for the public's help in finding several people, who could have information that may help in the investigation.

Police are asking for help in tracking down six people, who were seen on Highway 2 outside of Slave Lake on May 14, 2011 – the day before the wildfire swept through the area.

Investigators stressed the individuals are not considered suspects.

Anyone with information that could identify the following people is asked to contact RCMP immediately:

The public notice comes months after RCMP said their investigating into the wildfire found arson to be the likely cause of the fire that burned through much of Slave Lake.

Back in November, Sustainable Resource Development (SRD) Minister Frank Oberle said the investigation into the fire had ruled every other probable cause out, except arson.

Investigators said the fire started on May 14.

Before it was brought under control, the fire burned through 4,700 hectares, 7,000 Slave Lake residents were evacuated as a result of the fire.

About 400 buildings were destroyed in the fire, most of them were homes.

Anyone with information is asked to call their local RCMP detachment or Crime Stoppers at 1-800-222-TIPS (8477).