'Police should have been there': Edmonton woman says she was verbally assaulted by protesters during 'Freedom Convoy'

'Police should have been there': Edmonton woman says she was verbally assaulted by protesters during 'Freedom Convoy'

For the first time since immigrating to Edmonton 11 years ago, Michelle Peters-Jones no longer feels safe in her own city.

While she was downtown last Saturday around 2 p.m. with her five-year-old son to visit a local bookstore, the pair was approached by a group of protesters participating in the "Freedom Convoy" anti-vaccine and COVID-19 pandemic measures demonstrations.

"Two people came up to me, and they were all draped in Canadian flags and yelled at me and said that I did not need masks anymore and I did not need to be a sheep," Peters-Jones told the Edmonton Police Commission on Thursday.

Peters-Jones said she was masked while waiting for a bus by Enterprise Square and had nowhere else to go as more protesters moved around her.

"There was not a single police officer in sight," Peters-Jones said. "There were no police officers anywhere in sight that I could actually turn to and say something.

"Instead, I cowered in fear and distress," she added.

The protesters only started to back away from her after she started recording the incident on her phone.

In an interview with CTV News Edmonton, Peters-Jones said she wanted the police commission to hear her "voice" as a visible minority.

"I request, respectfully, that the police look at what happened on Saturday and be able to protect people like myself from the hate and the division that is being sown right now," she said.

For her, there needs to be more of an effort by officers to conduct "fair policing," so that people can feel safe.

"Normally, when anything happens like a protest or a parade, anything that really blocks traffic, you always have police somewhere along the line," Peters-Jones said. "I would have felt reassured had I seen somebody in that situation.

"Police should have been out there." 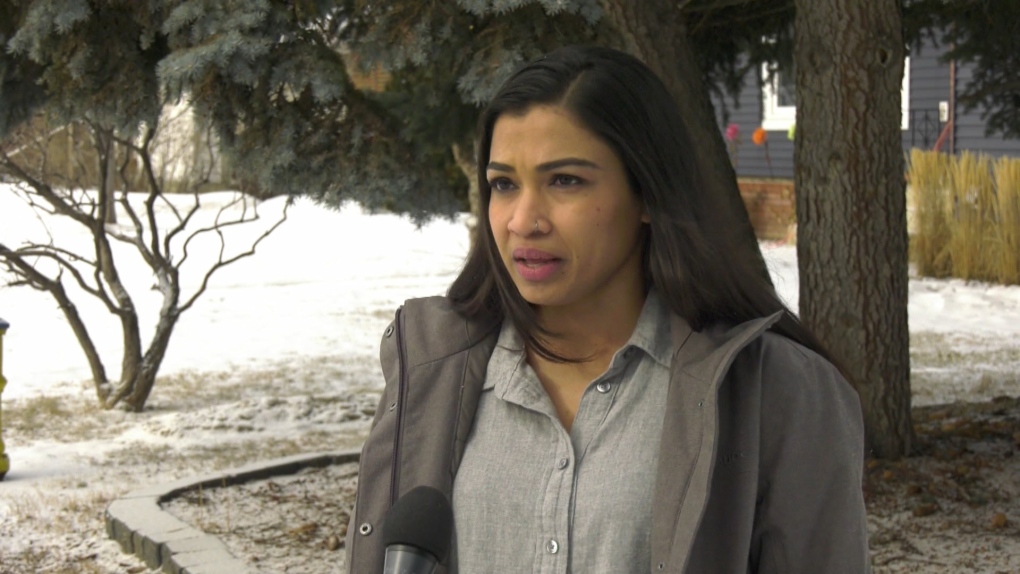 Michelle Peters-Jones told CTV News Edmonton she was approached by a group of protesters participating in the "Freedom Convoy" anti-vaccine and COVID-19 pandemic measures demonstrations on Feb. 5, 2022 (CTV News Edmonton).

The commission heard from seven other concerned Edmontonians who said they believed the service could have responded better to the protests.

John McDougall, police commission chair, thanked everyone for their feedback, adding that it values "comments and concerns" as they help the service "ensure it is providing the best that we can for the city."

EPS Chief Dale McFee said the priority for the police service is protecting people, property, and keeping the vehicles in the convoy demonstrations moving.

Police issued 70 tickets at the demonstrations, including 60 that will be mailed to the registered vehicle owners. Nine of those tickets were related to noise infractions, and 20 were for distracted driving. Other tickets were issued to drivers for failing to obey a traffic control device and being off of a truck route.

"It's a real toxic soup of growing culture war," Kent said, adding that the movement has now been infiltrated by a "number of dangerous" and racist groups.

"Instead of blaming the virus, they wind up blaming the politicians and medical personnel."

Kent said the use of trucks and vehicles helps to increase the visual perception of how large the protests are.

"If you were to take those individuals in those trucks, remove them from the trucks themselves, the numbers would be much, much smaller," Kent said.

"Horn honking is not going to accrue any political benefits," he added. "What it does, is it allows the protesters to feel a sense of power. They may feel relatively powerless in the context of normal political debate. But now, they get themselves, literally, heard and they get power through fear."

Most of the trucking industry has gotten vaccinated and continues to go to work, Kent said.

"This reaction against authorities is fuelled by social media," he said. "The one thing we can do is make sure that laws against hate crimes are improved and monitoring particular social media outlets."

Peters-Jones says she moved to Canada, particularly because of the country's welcoming of people from all backgrounds. After last weekend, the maple leaf is now a source of anxiety.

"The Canadian flag was always a symbol of peace, democracy, and compassion," she said. "That compassion has just been destroyed."