Pot’s potential: What's in store for Year 2 of cannabis legalization?

The industry calls it “Cannabis 2.0,” and it is now here…sort of.

That includes things like candy-like edibles and vape pens, made by federally approved producers.

However, don’t expect to see all of the new products immediately.

The federal government has warned Canadians edibles won’t likely be on store shelves until December. Some of the big Alberta pot chains believe it will take even longer.

“I think it will just take time to get these facilities up and running and producing the products,” said James Burns, CEO of AlCanna, which owns the Nova chain.

Like currently available products, edibles will come in plain, child-resistant containers, with a limit of 10 milligrams per package.

“With an edible, you’ve got to be very careful,” said Vioncek. “It doesn’t actually affect you as fast as actually smoking it.”

Det. Braydon Lawrence of the Edmonton Police Service told CTV News the effects of edibles, compared to those of a traditional joint, can be more difficult to detect when pulling over a driver.

“It’s a very specific odour that you can pick out and you can note,” said Lawrence. “Edibles don’t have that, and that’s going to be a concern for us.” 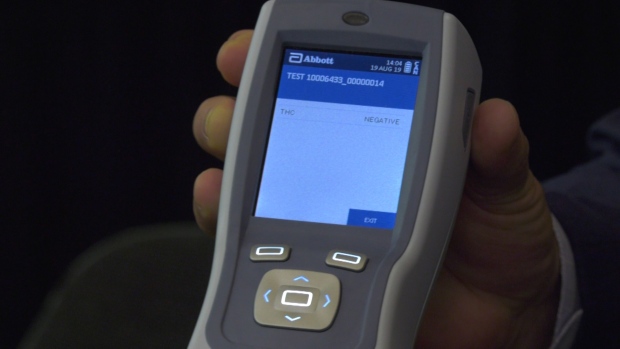 The second electronic device approved by Ottawa for roadside pot screening is expected to be available to Canadian police agencies this month.

The SoToxa is a handheld unit significantly smaller than the first approved device, the Draeger 5000 drug test.

“Being handheld allows them to take it in the field, anywhere they want to do a drug screening, particularly by the roadside,” said Fred Delfino, Law Enforcement Liaison for Abbott, which produces the SoToxa device.

Edmonton police currently have two Draeger units. There are currently no plans to purchase more of either approved device.

But police aren’t ruling out an increase of electronic roadside screening units in the future.

“Technology evolves so much, at such a rapid pace, that I could see that eventually being where we head,” said Lawrence.

Dozens more cannabis stores are expected to open across Alberta in 2019 and many more will open across the country, creating a demand for more marijuana.

Alberta-based Aurora Cannabis has emerged as one of the world’s biggest pot producers. The company continues to grow to meet that demand.

Aurora currently operates Aurora Sky, near the Edmonton International Airport. At 800,000 square feet, it’s believed to be the biggest cannabis production facility on the planet. And the company is currently building a facility twice as big, Aurora Sun, near Medicine Hat.

“Aurora Sun does take this to a completely new level,” said Cam Battley, Chief Corporate Officer for Aurora Cannabis. “It’s 1.6 million square feet and will produce over 230,000 kilograms of cannabis per year.”

The devices have been the subject of concern in the U.S., where they’ve been linked to 1,300 cases of lung injury and 26 deaths.

Currently, the USFDA and the Centers for Disease Control are investigating the common link between those cases. For now, U.S. officials are advising against the use of vape pens.

Aurora Cannabis tells CTV News the company is closely watching those developments. But the company still plans to move forward with its vape pens.

“Our situation is significantly different from in the U.S. in that every single product, whether it be medical or consumer, has to be approved by and cleared by Health Canada, which is, I would say, the foremost regulator in the world.”