EDMONTON -- The United Nurses of Alberta and other public sector workers rallied at the Alberta legislature Wednesday to protest the UCP's wage rollbacks, healthcare funding cuts and a recent bill.

The rally comes two days after the province introduced Bill 22, which is said to compromise the independence of pension plans.

"The UCP's Bill 22 in effect removes joint trusteeship and puts our pension plans under the control of the minister of finance," United Nurses of Alberta President Heather Smith said at the rally.

A day after she was removed from the Legislative House for saying the house leader was being misleading over Bill 22 and refusing to apologize, Opposition Leader Rachel Notley continued to criticize the UCP.

"If this premier wants to run around and run over our democracy, if he wants to shut down investigations into his party's corruption, all while cutting our healthcare, cutting your hours, cutting your wages and stealing your pensions, we will all call him out for being the corrupt premier that he is," Notley said. 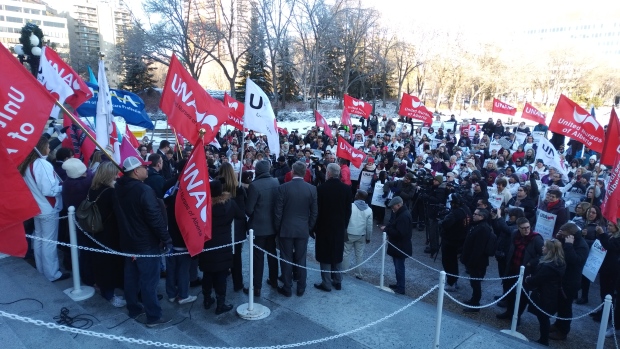