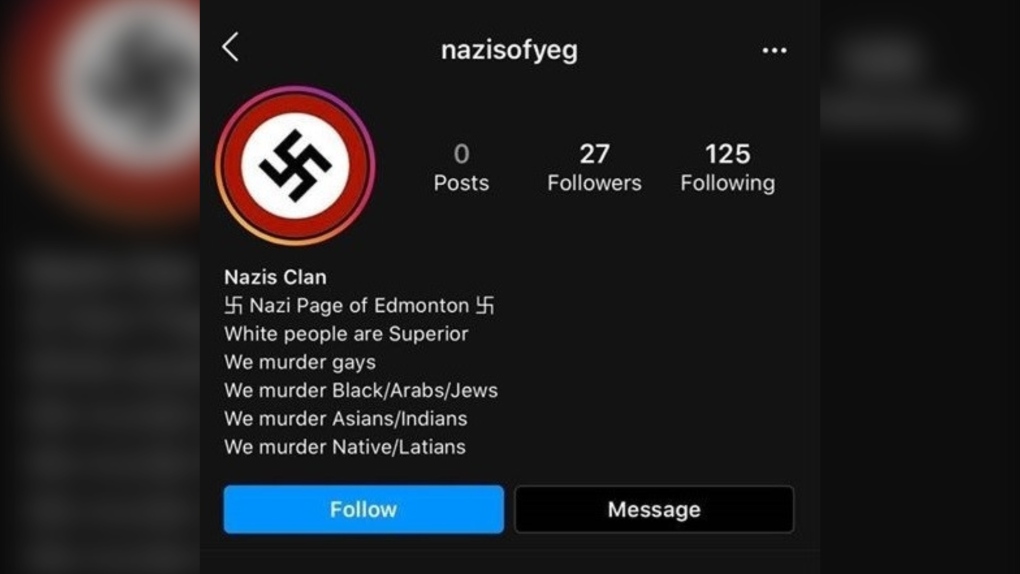 Edmonton police say a student was behind a racist Instagram account called "Nazis of YEG" which targeted multiple cultural groups and published the home address of a peer. (Photo provided.)

EDMONTON -- Edmonton police say a student was behind a racist Instagram account which targeted multiple cultural groups and published the home address of a peer.

The account “Nazis Clan,” under the user handle “nazisofyeg,” surfaced at the beginning of June. Its bio read “Nazi Page of Edmonton,” “White people are Superior,” and “We murder gays… Black/Arabs/Jew… Asians/Indians… Native/Latians.”

Police say the peer’s family was harassed by members of the public who believed they had created the account.

When a constable who works in schools as a resource officer heard concerns from staff the account was created by one of their own students, she joined the investigation.

The account was traced back to one student. They were not charged, but “given an opportunity to make amends and avoid early and unnecessary involvement in the criminal justice system,” police said.

Investigators called the case one about bullying, rather than racism.

“What was most important to me was trying to understand the context as to why the account was created in the first place,”  Const. Ellie Arias wrote in a statement.
“I’m happy to say that I have a great relationship with many of the students, and many of the kids and families I spoke with were comfortable opening up to me. As it turns out, this case wasn’t about racism, but about bullying.”

According to police, the amount of online bullying has increased with school being out since March because of the pandemic.

“The challenge is that youth don’t always grasp the repercussions of their actions, especially when it comes to digital platforms.”

The three-week investigation in Nazis of YEG started June 4.