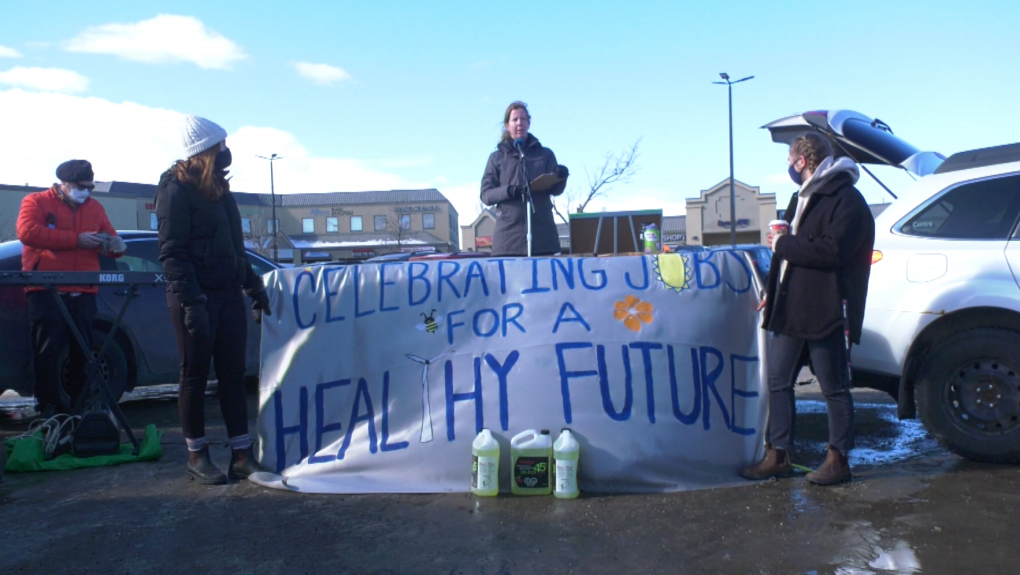 Protesters attend one of two rallies in Edmonton calling for a just transition toward a greener economy on Saturday, March 12, 2022 (CTV News Edmonton).

For Emily Hayes, an organizer partnered with the Council of Canadians, there needs to be more action to address climate change and the risks it poses now.

"I want my kids, and my grandkids, and even myself to have access to all these green, beautiful spaces that Earth has to offer," Hayes said. "I would just like to see a little bit of action."

"The just transition is basically a movement, it's something that we want to do to be able to convert over to sustainable energy," she added. "And that's a lot more than just environmental action. That's equitable jobs for all.

"That's making sure that no Canadian, no Albertan, and no anybody gets left behind when we're transitioning into all of these new sectors and just becoming leaders in a new economy," Hayes said.

The rallies in Edmonton were part of a national day of action hosted by 350.org Canada to raise awareness about climate change and the need to pass "bold legislation" to accelerate the pivot to renewable energy.

Dozens gathered in #Yeg with @CJEdmonton & @CanadiansOrg to vision a just transition. What would our lives look like by 2025 if we invested into a new economy based on justice, equity, and Indigenous sovereignty? #JustTransition pic.twitter.com/0tXR2pnBbg

Rallies were planned from coast to coast, including in Victoria, Vancouver, Calgary, Saskatoon, Ottawa, and Halifax.

Amid global turmoil, superyachts are selling more than ever. Here's why

Despite global conflict lurking on the horizon and energy prices putting the squeeze on millions, superyachts are selling more than ever. CTVNews.ca looks at why new superyacht owners are taking the plunge.