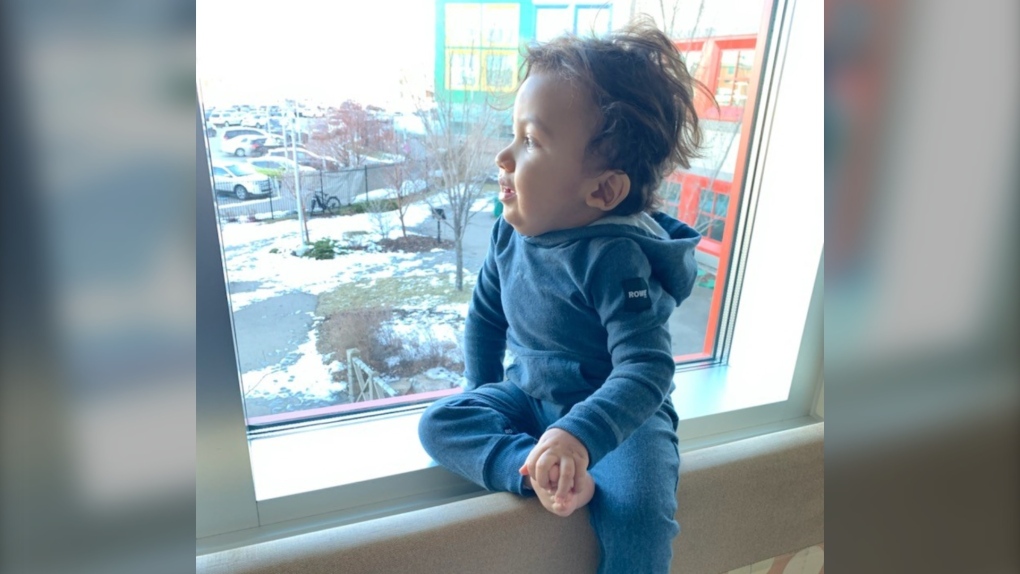 An Alberta boy, Kaysen Martin, underwent the Zolgensma gene-replacement therapy in December after an anonymous donor contributed $2 million to his family's fundraising campaign. At the time, the treatment made by Novartis was not approved by Health Canada. (Photo provided.)

EDMONTON -- The Pfizer and Moderna COVID-19 vaccines aren't the only landmark approvals Health Canada has been working on recently.

About one in 10,000 Canadian babies are born with a type of SMA each year, according to the National Organization for Rare Disorders. The genetic neuromuscular disease is caused by a defective or missing SMN1 gene, which results in a loss of muscle function. The young patients diagnosed with SMA often have trouble breathing, swallowing and crawling.

Zolgensma is designed to replace the missing or defective SMN1 gene by delivering a new working copy of it into a patient's cells via intravenous infusion, says Novartis. The therapy is supposed to stop the disease's progression and restore SMN protein production.

Before Health Canada's approval, patients could only access Zolgensma through a federal special access program at a roughly $2.8-million cost.

Following Wednesday's news, the next step will be for the provinces to work out their own funding models.

Even so, the Health Canada approval is a "huge win for the SMA community," said Bryarly Parker, a Fairview, Alta., mom whose boy was diagnosed with Type 2 SMA at 22 months old.

Sawyer's second birthday is Jan. 11. The family received the devastating diagnosis on Nov. 24.

"That gave us a month and a half to try and figure out what we were able to do with this," Parker told CTV News Edmonton.

In three weeks, the family fundraised more than $800,000 for Zolgensma. While the green light from the federal government is one hurdle cleared, they still have questions about when and how they'll access it – and for that reason, will continue fundraising until they have a guarantee their son will receive the therapy.

"We can't rely, unfortunately, on the government because we just don’t know how long it's going to take," Parker said.

"This is not a disease you want to deal (with) in time, because time is not your friend. Because every day it gets worse and worse when it's not treated."

A spokesperson with Alberta Health said the provincial government was pleased families were one step closer to accessing Zolgensma, but that it would continue, as part of discussions by the pan-Canadian Pharmaceutical Alliance with Novartis, to provide the drug on a case-by-case basis until the health technology assessment and price negotiations were completed.

"The number of children who meet the treatment criteria will be determine in the weeks ahead," Zoë Cooper told CTV News Edmonton in a statement.

Another Alberta mom of a young boy with SMA said the announcement was "like a giant weight lifted off my shoulders."

"You try to stay positive and optimistic, but it does weigh on you," she told CTV News Edmonton.

"Now knowing that it's approved and it's coming... it just gives us so much hope for his future."

Campaigns by several Alberta families with toddlers with SMA gained attention over the summer as they raced to get access before the children turned two, at which point Zolgensma may be less effective.

One family who had raised $1 million received the remaining $2 million from an anonymous donor to get the treatment four months after their son Kaysen Martin's second birthday.

A second family won Novartis' drug lottery, in which the company gave 100 doses of the treatment for free.

Their stories have helped fuel the Parker-Sych family's fight.

"As soon as I had seen (Kaysen) had received Zolgensma… I bawled," Parker told CTV News Edmonton. "It was incredible considering I've never met these people I person. I know I will – but it's just those stories and that hope it gives us… has been incredible."