Rataphooey! Norway rat found in Calgary, but believed to be pet 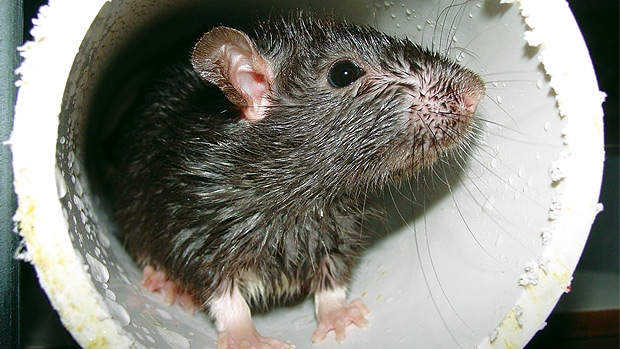 A Norway rat is shown in an undated photo. Courtesy: Orkin

CALGARY -- The city of Calgary says a dead Norway rat has been found in a southeast neighbourhood.

The city says the rodent was collected by a bylaw officer after a resident found the rat near his property.

The Animal & Bylaw Services Department suspects the rat was an escaped pet, but officials have been unable to confirm that.

No other evidence of rat activity has been found in the area.

The neighbourhood will be monitored on an ongoing basis until bylaw officers are satisfied there are no further rats.

Dozens of the pests have been discovered and killed at the dump in Medicine Hat, Alta., since Aug. 9 in an attempt to maintain the rat -free status Alberta has had since the 1950s.

Bylaw officers who usually relocate bull snakes found in Medicine Hat will now take the reptiles to the landfill in the hopes that they will eat the rats. That's in addition to baited traps and high-definition trail cameras to track the scurrying scavengers.

Ed Jollymore, Medicine Hat's waste manager, has said it's all hands on deck to tackle the infestation and believes the media attention the rat problem is getting will help.

Alberta estimates its rat control measures have prevented what would have been $1 billion in rodent-caused damage over the last 50 years.

Agricultural fieldmen known by Albertans as the "Rat Patrol" eliminate invading rats within a control zone 600 kilometres long and 30 kilometres wide along the province's eastern boundary.

The province says one pair of rats can thrive and begin a chain of breeding that can produce as many as 15,000 offspring a year, as long as they are close to food and sheltered from the weather and predators.

Public education campaigns in Alberta routinely stress the importance of keeping the province rat -free. Members of the public are encouraged to learn to identify Norway rats and urged to alert provincial officials if they spot one.