‘Really the only feasible choice’: Construction of southern LRT line moved ahead of northern line by Edmonton city council

EDMONTON -- Construction of the LRT Capital Line, that will run south from Century Park to Ellerslie Rd. moved up in the priority queue Monday.

In an eight to five vote, Edmonton city council made the decision in a special meeting.

The Metro Line north from Blatchford to Castle Downs had originally been tagged with the top priority distinction.

The decision came after a report authored by city administration recommended commencement of construction of the two legs of Edmonton’s LRT network be switched.

The report cites the south Edmonton hospital, which is currently under construction, cost and the number of land acquisitions needed to build north from Blatchford for the Metro Line as reasons for the flip flop. 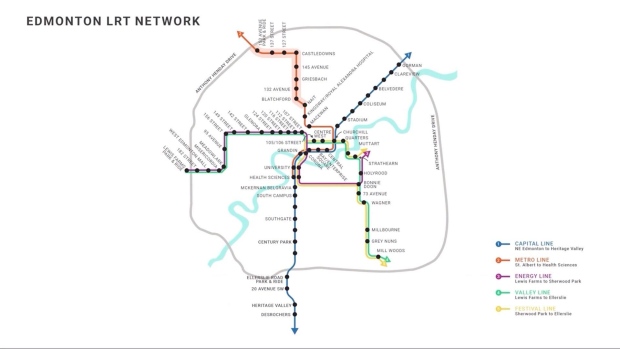 “Northwest is not as shovel-ready as southwest,” said Mayor Don Iveson, who voted in favour of the move. “The amount of money we have will nicely accommodate including the storage and maintenance garage for LRV (light rail vehicles) and so there really only is one technically feasible choice that includes a parking structure within the envelope of money that’s available.”

“Given that we have about a billion dollars to work with, it was really the only feasible choice,” said Iveson. “If we had $1.8 billion we’d have a real choice because we could extend to the northwest.”

With the design phase and much of the land acquisition already completed for the section of the Capital Line, the city says construction should be going ahead as early as next year.

“Of course I’m very disappointed,” said Ward 2 councillor Bev Esslinger on Friday, before the decision had been officially made. “I was thinking the next line to go would be the line into Castle Downs because it’s the last quadrant of the city to have LRT before we started expanding the current lines.”

Both the federal government and the province have committed a total of $2.94 billion for the project. Most of that money has been allocated, with $2.25 billion already spoken for.

The next step for the 4.5 kilometer south leg of the Capital Line will be to notify the provincial and federal governments of council’s decision and collect the funds needed from them to move forward with construction.