Dwayne Buckle grew up in and out of foster care. He said he was a difficult child who always ended up getting himself in trouble.

"Apparently, I was out of control, and I was just given away to group homes and foster homes all the time," Buckle said.

"I didn't listen. I didn't pay attention to the rules. I got myself in lots of trouble."

But throughout his troublesome youth, he had family he could rely on. His grandfather, cousin and particularly his Aunt Sharon always tried to help Buckle as much as they could.

"Every time I ended up in a foster home or group home, she would somehow get me out of it, and get me back on the farm," he said.

"She never gave up on me. She was like my mom."

Buckle's cousin and aunt helped him to become a firefighter. However, they never got the opportunity to celebrate together. Days after Buckle completed his certification, his aunt died of cancer. A week later, his cousin also died from cancer.

"That was the only family I had left," he said.

In an effort to honour the memory of his family, Buckle decided he would walk from Red Deer to Port Hardy, B.C. He started a Facebook page where people could follow his journey and donate to the Canadian Cancer Society.

"A few people in the beginning thought I was a little crazy for doing what I was doing, but once they saw that I was actually going to push through, they just started liking, sharing, and donating a lot more," he said.

Buckle left Red Deer on Oct. 21. His journey took him across the Rockies to Vernon and then to Kelowna to visit the Canadian Cancer Society. 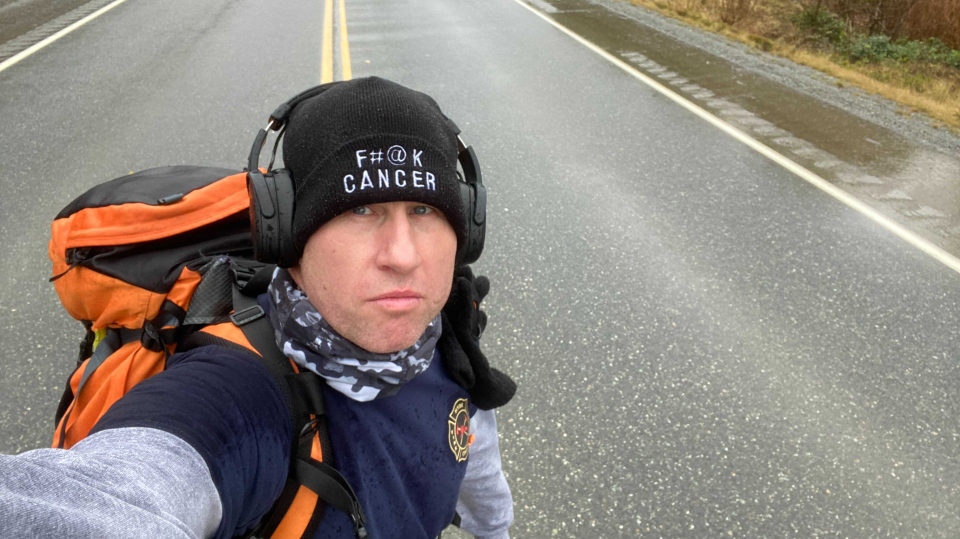 "My feet were swollen. I hurt my back. I blew my shoulder out. I wanted to take extra rest days, but it's just something I had to finish," he said.

Eighty-two days and 1,638 kilometres later, his journey ended with a dive into the ocean at Port Hardy.

"I went up to Port Hardy because I was reading a magazine and it said, 'The end of the road and the beginning to brand new adventures,' and I thought it would be kind of like a little baptism when I got there and jumped in the ocean," he said.

Buckle raised more than $4,000 with all proceeds going to the Canadian Cancer Society. While the hike was dedicated to his family, it also became symbol of his perseverance.

"It was a goal for myself as well, to see if I could push through," Buckle said.

"It was a struggle, and I made it and I didn't give up, just kept going."