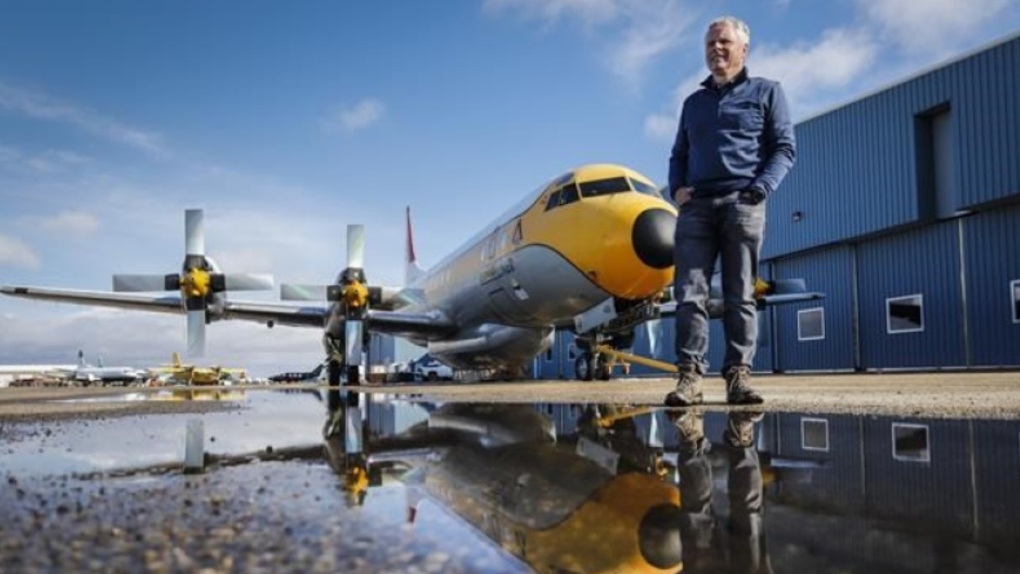 RED DEER, ALTA. -- A family-run company providing air-tanker support to control menacing wildfires in British Columbia, Alberta, Manitoba and Yukon is a little less busy these days, but it has nothing to do with the COVID-19 pandemic.

“It has been really quiet on the fire front in both Alberta and B.C. the past two or three years. You get areas of intense activity and then a lot of tedium waiting for things to happen,” says Paul Lane, vice-president and chief operating officer of Airspray Airtankers, which has a maintenance hangar at the airport in Red Deer, Alta.

Airspray has contracts with governments and is on call each fire season.

The backbone of its western Canadian fleet is the Lockheed Electra, a four turboprop-engine plane, about the size of a 737, It's equipped with a 12,000-litre belly tank that drops a mud slurry fire retardant from about 45 metres above the ground.

“It allows the ground crews to go in and work safely in terms of extinguishing the fire. It creates essentially a firebreak and we can drop anywhere from a twelfth of a load to a full salvo,” says Lane.

“Typically these are the first guys out, particularly in Western Canada.”

The fleet also includes 10 smaller Bird Dog aircraft, which carry command-and-control air-attack officers, who oversee how a fire is fought, including management of ground crews and helicopters dropping water.

Lane says the business that has been in operation for nearly 50 years. It has 54 aircraft with 35 based in Canada. The U.S. operation is located in Chico, Calif.

“We are running skimmer aircraft in Washington and Oregon and so those aircraft were quite busy particularly toward the end of the season.”

Raging fires in both states, as well as in California, have burned millions of hectares, caused deaths and destroyed hundreds of structures in the U.S. west coast's worst fire season in 70 years.

The winter months involve full maintenance on the air fleet.

Lane says the 60 pilots working for Airspray have at least 8,000 hours experience before being hired. They are recalled at the end of February for retraining before the fire season gets underway.

“Many of our pilots have been with us for many years and so they work for us in the summer and many of them did work for the airlines or did other types of flying in the winter.

“What you don't want is any complacency in the cockpit, particularly when you're flying that close to the ground.”

Lane believes wildfires have become more dangerous in recent years because people are living closer to where fires start.

“If you look at the canyons in California, they're more and more becoming populated with extremely large houses and infrastructure,” he says.

This report by The Canadian Press was first published October 19, 2020.