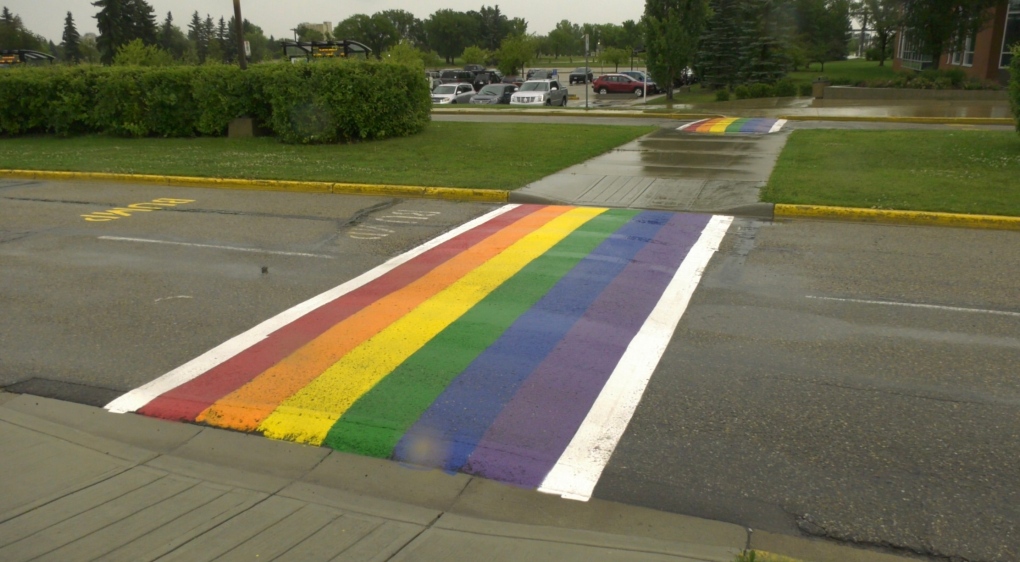 “Regardless of their cultural background, in terms of sexual orientation or gender, we want it to be a safe, inclusive learning environment.”

President of the Student’s Association Brittany Lausen had a similar sentiment expressing that Red Deer College is a place for people from all walks of life.

“Everybody is different and we need to love and accept everybody for who they are,” said Lausen.

“It’s so important to show that all students regardless of race, religion, sexual identity, sexual orientation are welcome here and are able to work safely here.”

Lenny Gallant, Board Chair for the Central Alberta Pride Society, said he is glad that Red Deer College decided on a permanent crosswalk to show its support of the LGTBQ+ community.

“It really does mean a lot to see the crosswalk. It’s not just a flag that’s there for a few days. I think it’s great to see it’s permanently there.”

Ardin Brownlee, a Pride on Campus member, said the raising of the Pride flag and the crosswalk are small gestures, but they meant a lot to the community.

“All these big and little things help push progress in the right direction even though there’s still a long way to go.”

Brownlee added that it is important Red Deer College is cultivating an environment of inclusivity because many students may not feel that acceptance outside of campus.

“They might be coming in from somewhere they are not accepted and just seeing a flag or the sidewalk lets them know they’re welcome here,” said Brownlee.

“You’re not learning all the time when you’re in college. You’re figuring yourself out and meeting new friends, so finding a place where you feel accepted and welcome is extremely important.”