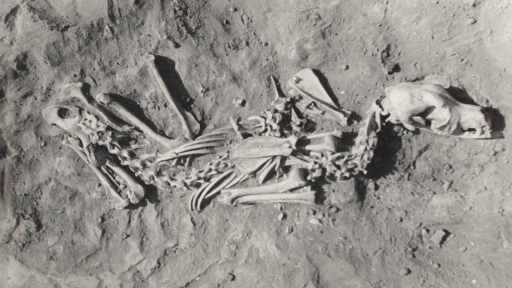 The fossil of a dog buried in a crouched or sitting position is shown in this undated handout photo. (THE CANADIAN PRESS/HO - University of Alberta, Dr. Robert Losey)

The bodies had been carefully interred. One was buried with a long, carved spoon. Another had been honoured with a necklace of elk teeth.

“They look like people being buried - except they're dogs,” said Robert Losey, a University of Alberta archeologist.

Those ancient pets are not only moving evidence of their owners' esteem, they're now part of research hinting at how far back dogs and humans go.

“We don't just have a human history that's independent of everything else on Earth,” said Losey, one of 56 international authors of a paper published Thursday that links human and canine genetics.

“We've been successful by relying on and altering the histories of other species.”

The first dog probably emerged from a type of wolf, but no one knows when, or where, or who domesticated it. It was a while ago. The oldest dog burial dates back about 14,000 years.

Losey and his many colleagues sequenced the genomes of 27 ancient dogs - including the one with the elk-tooth collar - with a maximum age of about 11,000 years. They compared them with genomes of 17 ancient humans who lived in roughly the same time and place as the dogs.

The dog genomes showed that 11 millennia ago, dogs had been domesticated long enough to produce five separate genetic lineages. That suggests the relationship between humans and dogs was old even then.

“They'd already been around for a long time, enough to differentiate groups by the end of the ice age,” said Losey.

“When people migrated, they didn't migrate alone,” Losey said. “They came with dogs, often a genetically distinct form of dogs.”

When the first farmers came to Europe from what is now eastern Turkey, they didn't adopt the dogs already living there. They brought their own. The genomes of both species track together nicely.

That didn't always happen. But Losey and his colleagues found that throughout most of prehistory, humans lighting out for new territory preferred companions they already knew.

The differences between the genetic strands weren't breeds. Losey said the variation between dogs then was much less than it is today and that most of them would have looked much alike.

“They would have been somewhat diverse,” Losey said. “Most or all of them would physically mix right in with a modern dog - some all-black dogs, some all-white dogs, some with floppy ears. If my neighbour were walking one of these dogs from 10,000 years ago, you wouldn't blink an eye.”

Losey, a dog lover himself, said studying the relationship between humans and dogs gives him a little insight into that long-ago pet owner who laid his friend to rest by the shores of Lake Baikal.

“There's such a huge public interest in dogs,” he said.

“Every time we learn even a little bit more about their long history with people, we get additional insight into what it means to live with these animals.”

This report by The Canadian Press was first published Oct. 29, 2020.