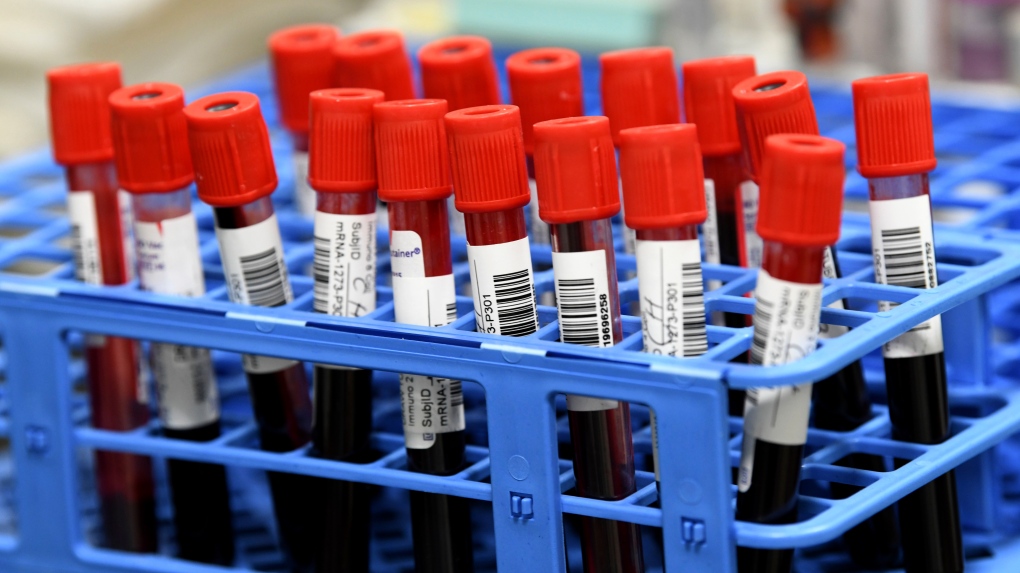 In this Wednesday, Sept. 2, 2020 file photo, blood samples from volunteers participating in the National Institutes of Health-funded Moderna COVID-19 vaccine third phase clinical trail wait to be processed in a lab at the University of Miami Miller School of Medicine in Miami. (AP Photo/Taimy Alvarez)

Some advocacy groups and an Alberta researcher are expressing concerns over the DynaLife takeover of the vast majority of community lab testing in the province.

Last week, Alberta Health Services announced it had awarded private company DynaLife a contract to increase the share of medical laboratory testing to 65 per cent or about 50 million tests, starting July 1.

Previously, Alberta Precision Laboratories (APL), a subsidiary of AHS, performed most tests in the province, with DynaLife providing some lab services in Edmonton and other communities in the North health zone.

Using interviews with laboratory workers and Freedom of Information and Protection of Privacy (FOIP) requests, Graff-McRae concludes that "all Albertans stand to lose from this deal."

"Instead of a modern, sustainable lab system designed for Albertans, the DynaLife deal offers false economies, menial savings, and a smaller and demoralized workforce, a massive infrastructure deficit, and a fragmented system with little accountability," Graff-McRae said.

"Further privatization does nothing to resolve the challenges facing the laboratory sector," she added on Monday. "It creates new problems and exacerbates the existing ones."

"The United Conservative Party's transformation of laboratory services in Alberta regards a large corporation and its shareholders over the current and long-term interests of Albertans."

"Contracting routine community lab work to DynaLife will enhance service for Albertans and generate cost savings that can be used to support other priorities and services across the healthcare system," Copping said, in a statement.

DOUBTS ABOUT LEVEL OF COST SAVINGS

Graff-McRae noted in the research document that AHS analysis contradicted the provincial government's commissioned review for cost savings conducted by Ernst & Young in 2019.

According to that review, when comparing similar tests offered in Alberta, there was a cost differential of $1.29 per test between APL and private providers like DynaLife.

Excluding public health and genetic testing, from the period reviewed, APL conducted a total of 60 million tests at a cost of $576 million. In comparison, contractors in Alberta completed 19 million tests for $158 million.

Ernst & Young estimated the total annual potential cost saving for outsourcing community labs to be $102 million. According to Graff-McRae, internal AHS and APL documents released by FOIP suggested annual savings in the range of $18 to $36 million, at most.

"Within the FOIP'ed documents that we received, there's a whole string of conversations among APL executives trying to ask for clarification around the per-test differential that Ernst & Young was reporting," Graff-McRae said.

"The response there is completely redacted in the documents we received. It indicates that this wasn't something that seemed very straightforward, even amongst the three executive leaders at APL."

When asked by CTV News Edmonton for a precise figure of expected cost savings from the new DynaLife takeover of community testing, the province said specific costs and savings are subject to the negotiations for a final service contract.

Alberta's Opposition says it is concerned that the quality of care patients expect from medical testing could be reduced by the DynaLife takeover.

"We need a laboratory system whose first obligation is to Albertans, not corporate shareholders," Shepherd added.

At a media availability on Monday, Graff-McRae said that privatized lab services often prioritize the number of tests completed versus the quality of results.

In addition, Graff-McRae says the takeover plan will create two systems of lab care since DynaLife will be operating in larger communities — like Edmonton, Calgary, Red Deer, Medicine Hat, and Grande Prairie — while smaller rural areas will continue to be served by APL.

"This plan creates a distinction between access within Edmonton and Calgary versus rural and remote communities and how collections and lab sample processing will be conducted in those smaller communities," she said.

Graff-McRae suggested this may cause delays in turnaround times for samples, a difficulty for rural Albertans in accessing testing sites, and potential for smaller labs that have previously completed testing in-house to now have to send samples to Edmonton or Calgary.

"It may mean doing more with less," she said.

Steve Buick, press secretary for the minister of health, told CTV News Edmonton in a statement that DynaLife has provided high-quality community lab service for more than 25 years.

"AHS is expanding on a proven model," Buick said. "DynaLife and many other independent partners provide services under contract to our publicly funded health system, from lab tests and diagnostic imaging to home care and continuing care.

"The goal of contracting lab tests and other services is to provide the same or better service, and save money to reinvest in the health system," he added. "That makes sense to us and to other governments of all parties across Canada."

NO JOB LOSSES, BUT QUESTIONS REMAIN

Of the more than 6,000 lab professionals represented by the Health Sciences Association of Alberta (HSAA), Graff-McRae says up to 1,400 will be impacted by the contracting of service.

"Internal APL documents obtained via FOIP reveal that staff across the organization were caught completely flat-footed, and many expressed shock and confusion," Graff-McRae said in the report.

"The lack of transparency and consultation with workers about the proposals also exacerbated their unease," she added.

According to AHS, DynaLife has agreed to fold all APL employees affected by the takeover into its organization under existing collective agreements and provide "the same, or similar, terms."

The HSAA says it too has been assured there would be no job losses in the transition and that people working for DynaLife were still eligible to be members of the union.

"Assurances of no job losses and that lab professionals will continue to be represented by the HSAA is good news," said HSAA president Mike Parker in a statement.

Parker said there are still questions many HSAA laboratory staff have, including what happens to their pensions.

The HSAA and Graff-McRae hope the complete DynaLife contract be released to the public for transparency and so that workers and taxpayers can see what will happen to the lab system.

"Albertans and lab professionals deserve to know how lab services will be impacted," Parker added.

"For two years now, lab workers have been giving their all to protect Albertans during the pandemic while being kept in the dark as the UCP blindly plows ahead with its privatization plans."

Graff-McRae added that while workers have been offered job protections under the new contract with DynaLife, that doesn't mean the same experience qualifications will transfer over, or they will be doing the same job or roles at the same time compensation and location of work.

"This makes it really difficult for workers to plan for their families and their future," she said. "It makes it incredibly difficult for our lab system to attract and retain experienced and talented lab professionals."