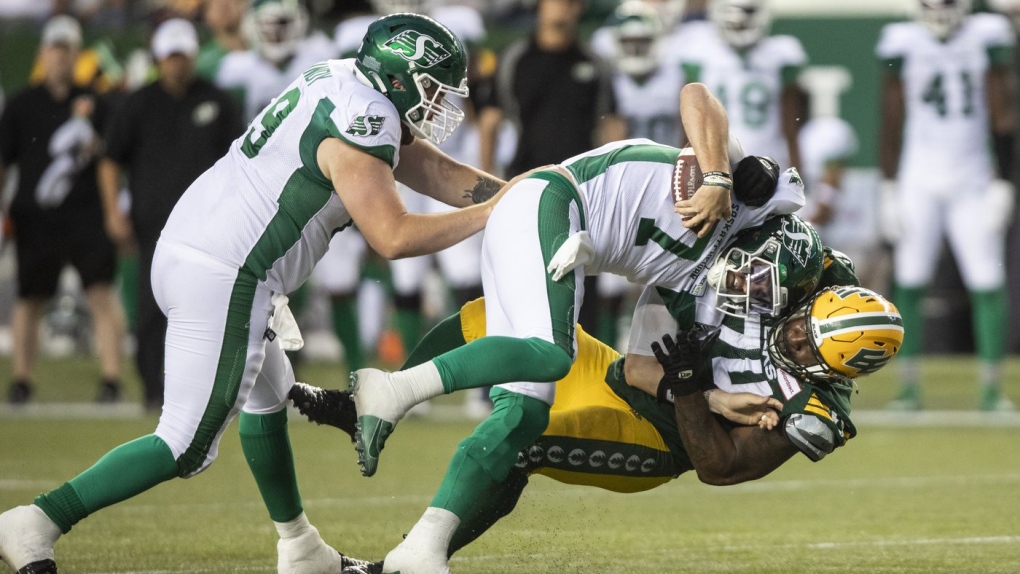 Having a break definitely seemed to serve Saskatchewan well.

Quarterback Cody Fajardo ran for a pair of touchdowns and passed for another as the Saskatchewan Roughriders emerged with a 34-23 CFL victory over the Edmonton Elks on Saturday.

The Roughriders (5-4) had lost three consecutive games before having a bye week and coming back with a win over Edmonton.

“Any win is a good win,” said Saskatchewan linebacker Darnell Sankey. “We come out here and get a win on the road, it’s an accomplishment.

“We understand that we can’t underestimate any team, especially right now. We came in 4-4 and it is nice to get a win. We know we were the better team and that’s why we came out here and got the win. This definitely has our morale up.”

Fajardo felt like the break helped soothe his injured knee, as he actually led his team in rushing yards on the night with 51.

“I took a few shots on it and didn’t feel anything,” he said. “I was able to run fairly well and move around in the pocket.

"To be able to feel like myself again and have my legs back makes it a little bit easier for the guys up front and creates some big plays downfield. I’m feeling pretty good right now.”

The Elks (2-7) have now lost 12 straight home games at Commonwealth Stadium, a frustrating stretch extending back to Oct. 12, 2019.

After Saskatchewan recorded a punt single on its opening drive, Edmonton came roaring back with quarterback Taylor Cornelius opting to run himself on a broken play for a 10-yard touchdown.

Fajardo responded in kind late in the opening quarter with a one-yard plunge to put the Riders back in front.

Edmonton looked poised to regain the lead, but Cornelius fumbled the ball on the Saskatchewan five-yard line, with Rider Charleston Hughes recovering the ball.

The teams then traded field goals, with Elk Sergio Castillo making one from 38 yards and Lauther connecting from 46.

The Elks surged back ahead when Cornelius took another ball into the end zone himself, scrambling in from 26 yards with 31 seconds left in the opening half.

However, Saskatchewan would regain the lead before the halftime break on the ensuing kickoff as Mario Alford blazed 98 yards for the touchdown to give his team a 21-17 lead.

The halftime break was extended because of nearby lightning strikes.

Edmonton conceded another punt single, the only point in the third.

Castillo started the fourth quarter with a 44-yard field goal, and got another 46-yarder shortly after on the heels of an interception by Nafees Lyon to give them a one-point advantage.

“I threw an interception, but guys stayed positive on the sideline and pulled through after that and we found a way to score two more touchdowns after that,” Fajardo said. “It means a lot when you make a mistake and your teammates have your back like that.”

The Riders regained the lead with four minutes left as Fajardo found Duke Williams in the end zone with a 24-yard TD pass. The two-point convert attempt failed.

Edmonton attempted to trade blows, but Cornelius was picked off by Rolan Milligan, leading to a six-yard QB keeper for a touchdown by Fajardo.

Both teams return to action next Friday as the Elks travel to Ottawa and the Roughriders host the B.C. Lions.

This report by The Canadian Press was first published Aug. 13, 2022

A U.S. court has sentenced a Canadian man to 20 years in prison for his role in a number of cyberattacks involving the ransomware NetWalker.

'Unheard of': Tens of thousands of salmon found dead in B.C. creek as drought conditions persist

B.C.'s sunny, dry weather is leading to major drought conditions in parts of the province, causing devastating impacts for some wildlife.

More than 16,000 customers are still without electricity 12 days after post-tropical storm Fiona hit the Maritimes on Sept. 23.