School board defends its stance on gay straight alliances

The Edmonton Public School Board is standing by its decision to let students who join gay straight alliances decide for themselves whether they tell their parents.

Earlier this week, the Justice Centre for Constitutional Freedoms sent a letter to schoolboard trustees across the province, urging them to amend their policies so school staff can tell parents when their children join GSAs.

It reads in part, “your school district is no longer required to retain policies to keep secrets from parents,” and argues doing so infringes on the rights of students and parents.The EPSB chair said earlier this week school boards across the province received a letter urging them to match their policies with a new law brought in by the United Conservative government.

Doing so would match a provision of the Education Act — a new law brought in by the UCP on Sept. 1. It was previously prohibited for school staff to share this information with parents under the School Act while the NDP was in power, who argued the provision protected LGBTQ students from being outed to their parents.

“We don’t take advice nor do we need advice from the Justice Centre for Constitutional Freedoms,” said Trisha Estabrooks, EPSB Chair, “It’s their right to send it but we have no intention of listening.”

The letter states the “school district is no longer required to retain policies to keep secrets from parents” and mentions how JCCF was suing the Alberta government over the constitutional validity of the provisions of the School Act. The court cases were discontinued once the Education Act was introduced.

Marty Moore, the JCCF's lawyer and author of the letter, said students have a constitutional right to the care and support of their parent.

“And when there’s a blanket prohibition on that, those rights are implicated and potentially infringed, especially when you’re dealing with vulnerable students,” Moore said.

During question period Thursday, Opposition MLA and LGBTQ issues critic Janis Irwin said the letter contains a threat of legal action against Edmonton Public Schools and bullying, and asked whether the province would cover legal fees for school boards should JCCF continue to pursue legal action.

The education minister didn’t commit to that but pointed out how the privacy commissioner said in June that membership in any student organization, including GSAs is protected under Alberta’s privacy laws.

“Mr. Carpay and his group does not speak for the government of Alberta, nor do they speak for the department of education,” said Minister of Education Adriana LaGrange. “Students can be assured that they will continue to be protected and cared for in our schools.”

Moore said Friday the letter’s intent was to educate trustees about constitutional rights, and there’s no intention to launch legal action on the basis of the letter. 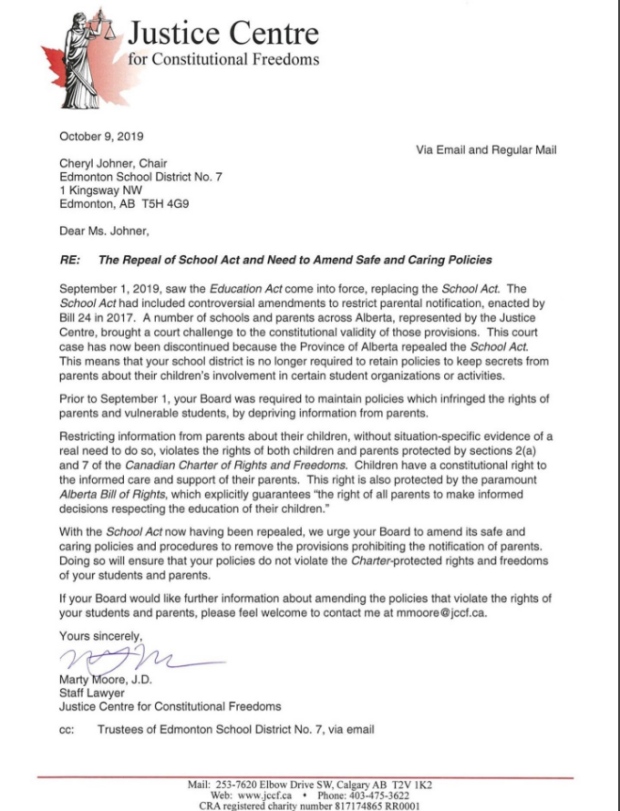