A group of older "kids" shared their well-earned wisdom with students heading back to class this week.

Seniors at the Dr. James Hemstock Retirement Residence in Lloydminster shared their back-to-school advice in a photo series posted on Facebook.

Gerald Groenen, 94, took part in the project.  His advice to students: Always try to see the good in people.

Groenen says he has seen the best and very worst. He was in Holland when it was occupied by the Nazis in World War II, he was sent to Germany as forced labour for a farm and he served with the Dutch Army in Indonesia.

"I think that there's a lot more good people than bad people, and that is even today. And that was then, despite all the wars, despite all the cruelties, six million people killed," he told CTV News Edmonton. "And I think if we instill in the young people to believe that, then they automatically already make it better."

He also says all students have the right tools to succeed, even if they are not the top of their class.

"Believe in yourself," Groenen said. "You do as good as you can, be a good person, see the good in other people and then you automatically you'll do alright." 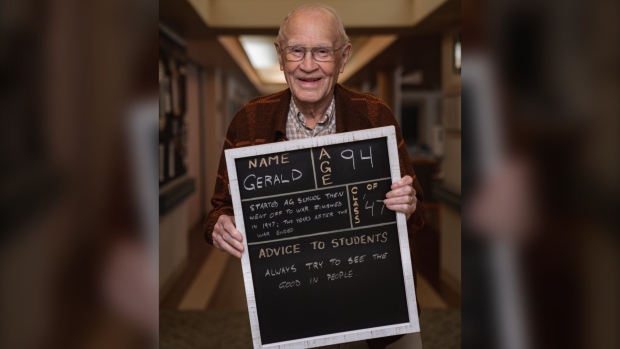 Amber Fisher is the marketing manager at Dr. James Hemstock Residence and Hearthstone Place. She said the residents were excited to share their perspective on heading back to class.

"That generation had a lot of people who didn't finish school, simply because they didn't have the choice," Fisher said.

"It's so special how something so genuine is getting so much attention."

The photos have been viewed almost five million times, by users around the world.

"The kind words from these individuals who are well in their age, they've experienced it all, and yet their comments and their advice is simple in nature," Whiting said. "It resonates loud and true."