September snowfalls more common, but likely not this fall 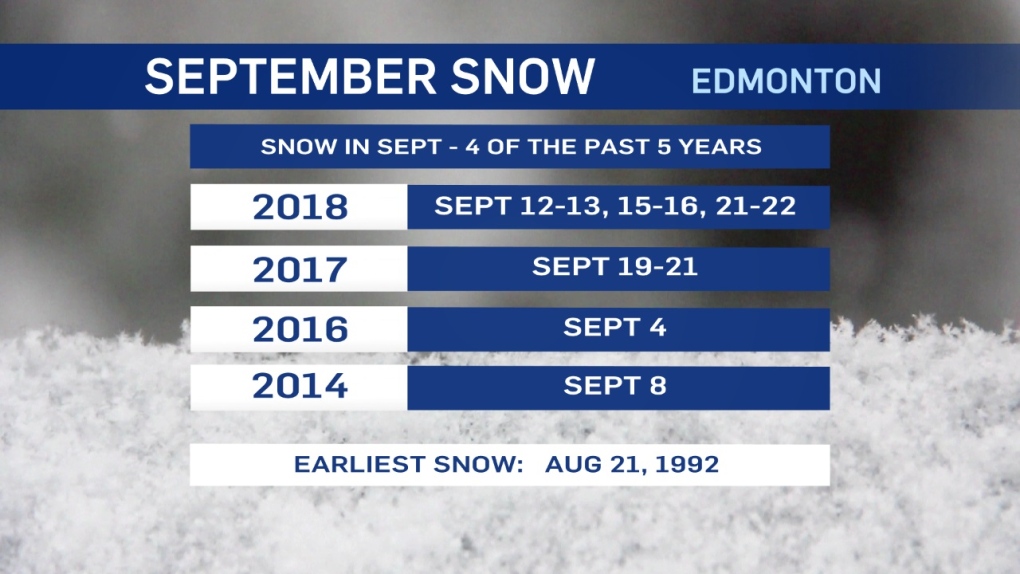 One year ago, we were on the cusp of our first snowfall of the year in Edmonton.

Rain in the evening of September 12th became snow overnight and Edmontonians woke up to a blanket of two to three centimetres of snow on the ground.

That would turn out to be the first of three September snowfalls in 2018.

To get THAT much snow in September is rare.

Edmonton has had snow in four of the past five years in September.

And...we're not just talking about wet flurries.  This has been stick to the grass, accumulating snow.

The chance of snow THIS September is low. For now, the outlook to the 25th has no snow, so that takes us close to the end of the month.

September snow used to be pretty typical.It snowed five out of ten years in the 1950s, 60s and 70s.

In fact, Edmonton went nine straight years without a September snow prior to 2014.  That's the longest stretch of snow-free Septembers in the past 70 years.

But, last year was special, EVEN compared to the 50s and 60s.

2018 had a record-setting total of 38 cm of snowfall at the International Airport south of the city.

The daily snow-depth was never more than 5 cm on the ground.

But over the course of the month, nearly 40 cm fell! That's the average snowfall for December and January COMBINED.

And in case you're curious about 2015, Edmonton didn't get its first snow until late in November that year.

The Autumnal Equinox falls on Sept 21-23 each year (it's early in the morning of the 23rd this year).

So Edmonton has had Summer Snow in four of the past five years.