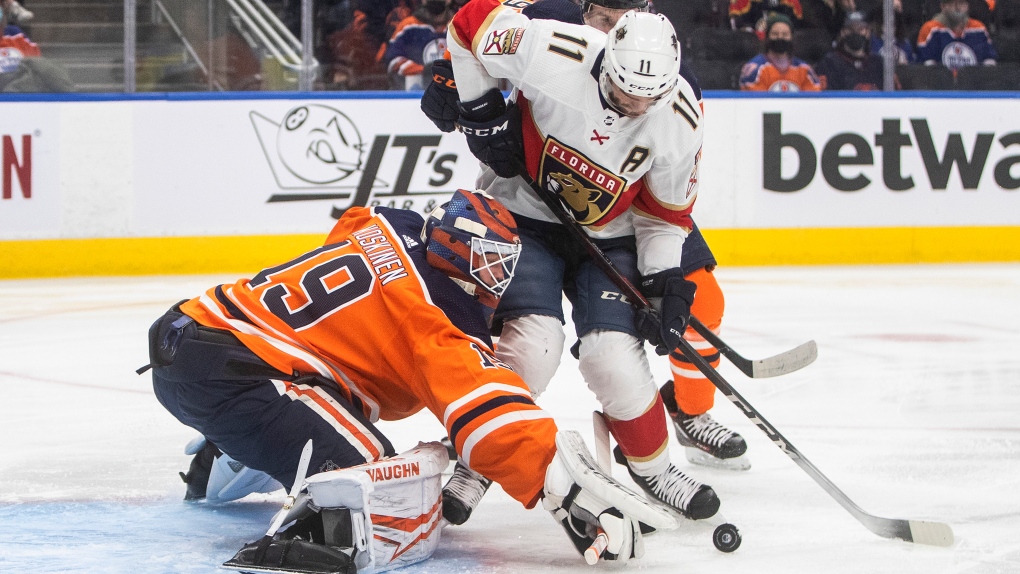 Sergei Bobrovsky made 40 saves for his first shutout of the season as the Florida Panthers defeated the ice-cold Edmonton Oilers 6-0 on Thursday.

Aleksander Barkov scored two goals and added an assist for the Panthers (27-8-5), who improved to 9-1-1 in their last 11 games.

There was no scoring in the first period despite Edmonton peppering Bobrovsky with 17 shots.

Koskinen made seven saves in the Edmonton net in the opening frame.

Florida got on the board first, scoring a power-play goal about five-and-a-half minutes into the second period. Sam Reinhart chipped a puck over splayed Oilers defender Darnell Nurse to Barkov, who fired home his 16th of the season. The Oilers have now allowed the first goal of the game in 23 of their last 27 games.

Verhaeghe was left alone in front of the net and unleashed a bullet to the top corner for his 14th goal of the season near the midway point of the game to give the Panthers a 2-0 lead.

Barkov added to Florida's lead seven minutes into the third when his long shot found its way through a screen.

The Panthers made it 4-0 with a power-play goal with four minutes left in the final period as Duclair swatted a loose puck into a wide open net for his 17th of the campaign.

Just over a minute later the Panthers got another power-play goal as Bennett sent a backhand shot off the post and in for his 17th as well.

Edmonton's end-of-game collapse saw the Panthers score their third goal in 2:36 as Tippett notched his fifth.

Florida plays the third game of a five-stop road trip in Vancouver on Friday, while the Oilers remain home to welcome the Calgary Flames on Saturday.

This report by The Canadian Press was first published Jan. 20, 2022.

Nestle is flying baby formula into America as shortage continues

Nestle is rushing baby formula into the United States via airfreight in a bid to ease a nationwide shortage that is unnerving parents around the country.