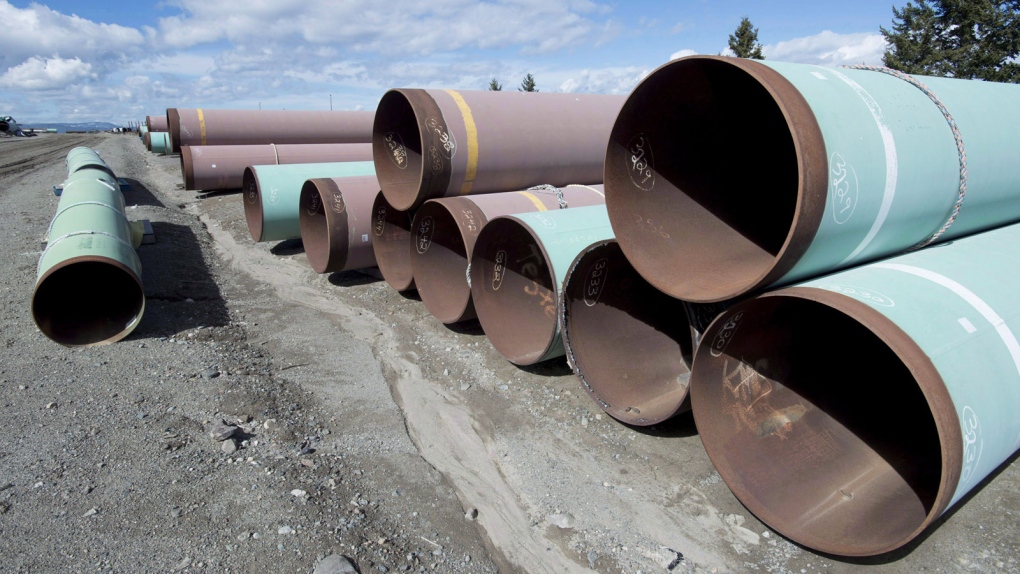 Pipes are seen at the pipe yard at the Transmountain facility in Kamloops, B.C., on March 27, 2017. THE CANADIAN PRESS/Jonathan Hayward

Authors of the report from SFU's School of Resource and Environmental Management say they "couldn't find a scenario" where the pipeline creates a net benefit.

"The net cost ranged from anywhere from about $4.2 billion to just over $18 billion," said report co-author Thomas Gunton who argues that money could have been better spent elsewhere.

"Use those funds to invest in things more productively - like in Alberta things like hydrogen development [and] create long-term sustainable development in the new economy."

In 2018, the Canadian government spent $4.5 billion to buy the pipeline from Kinder Morgan in 2018. The pipeline's expansion calls for a twinning of the existing line that runs between suburbs of Edmonton and Vancouver.

It's expected to be complete by December 2022 and would add nearly 300,000 barrels of capacity a day.

Ottawa says it expects the project to be a success.

"The government does not intend to be the long-term owner of Trans Mountain Corporation. It intends to launch a divestment process after the expansion project is further de-risked and after engagement with Indigenous groups has concluded," reads a statement from the Office of the Deputy Prime Minister and Minister of Finance.

"The government is confident that the Trans Mountain project is a responsible investment for Canadians, and is committed to investing every dollar earned in clean energy projects."

Skeptics of the report also point out it underestimates the future oil market, particularly once the expansion is completed.

"It is the Canadian path. If you're a member in Canada, you should be able to move your product across Canada if you do it in a safe manner."