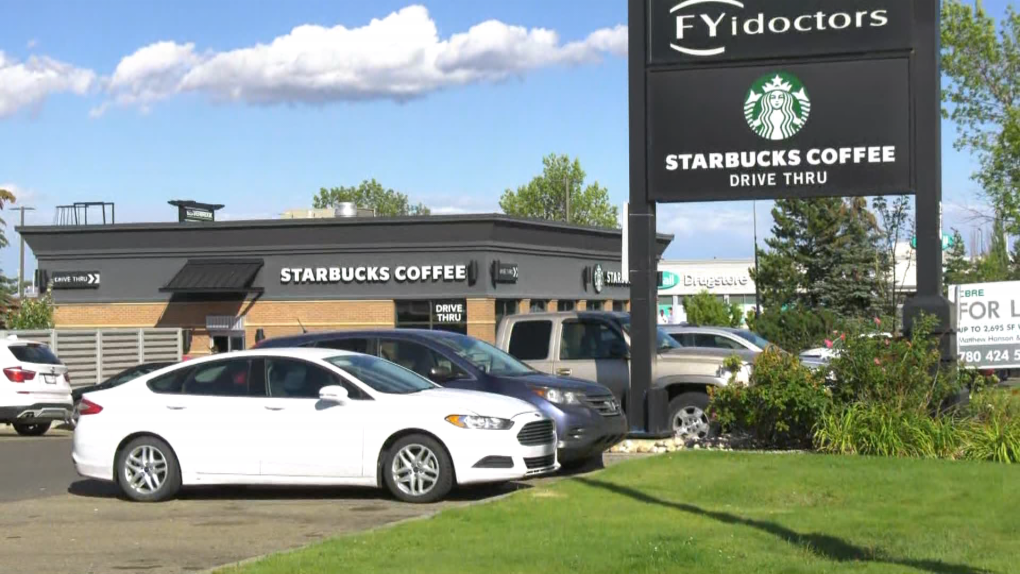 The Beaverbrook Starbucks will become the third in Alberta to join the United Steelworkers Union. (CTV News Edmonton/Sean McClune)

Employees at a local Starbucks voted to unionize, becoming the third location in the province to do so.

Employees at the Beaverbrook Starbucks, in Sherwood Park, Alta., have joined the United Steelworkers Union (USW) and are preparing to enter the collective bargaining process.

The decision by the 41 workers at Beaverbrook to join the USW is part of a growing movement in North America, and the lead organizer for the USW in Western Canada, Pedro Guerra, said over 300 Starbucks locations in the US have filed to unionize.

“The capacity of these young workers to organize was amazing,” said Guerra. “I think that young workers realize the union is the only way to protect themselves against the big corporation.”

Guerra said the pandemic showed many workers how vulnerable they were, adding that the first Starbucks in Canada to approach the USW did so after pandemic-related workplace safety concerns were brushed off by management in 2020.

That location didn’t end up voting yes, but other groups have since joined the USW, including two stores in Sherwood Park and one in Calgary. Guerra said five locations in Lethbridge have also voted, but the results won’t be known until Wednesday.

Guerra said that collective bargaining agreements negotiated by the union will help Starbucks employees secure better wages, protect them during workplace disputes and ensure they have fair access to opportunities within the company.

“I think it’s a win-win for young workers that are working in Starbucks.”

The company has tried to dissuade employees, Guerra said, using tactics he said are in bad faith and prevents workers from making up their own minds. Sara Doran, Beaverbrook barista said she is hopeful that the upcoming negotiations will be positive.

“It’s been a really respectful process, and I really hope that through this collective bargaining journey, that it will remain respectful and professional,” said Doran.

Doran said in addition to bettering working conditions and wages, the decision was also motivated by a desire for empowerment.

“I think that unions across North America, they promote equality amongst individuals within the group. And I do believe that they help to foster leadership, responsibility, accountability and empowerment."

“It’s a really exciting time and it’s an honour to be a part of this movement. And I just hope that everyone's voice will be heard,” Doran added.

The federal government does not have a willing partner to find a way to introduce fire codes on First Nation reserves, a newly released document shows.

A quarter of Canadians think prices will eventually fall. Here's why that's unlikely

According to a Bank of Canada survey, more than a quarter of Canadians believe that current decades-high prices will drop five years from now.

Investigators scrambled on Monday to discover why a 72-year-old gunman opened fire in a California dance hall popular with older patrons and killed 10 people before fatally turning a gun on himself hours later.

The Ottawa Police Services Board will receive an update on police preparations for a possible 'Freedom Convoy 2.0' this afternoon, ahead of the one-year anniversary of the protests against COVID-19 vaccine mandates.

Prime Minister Justin Trudeau and his ministers are gathering at a Hamilton hotel today to begin a three-day cabinet retreat.

One of the main hurdles Canada faces in the hydrogen energy market is competition from south of the border, a Canadian public policy consultant says.

'Significant' snowstorm heading for southern Ontario. Here's what to expect

Southern Ontario is on track to get hit with a significant winter storm this week, with 'rapidly accumulating snow' expected to make travel difficult.

Despite Ontario no longer requiring health-care workers to be vaccinated against COVID-19, all of the province's 140 public hospitals continue to enforce a mandatory vaccination policy, leaving some experienced front-line workers in the dust as facilities face a staffing crisis.

1 dead after snowmobilers caught in avalanche near Valemount, B.C.

One person has died after two snowmobilers were caught in an avalanche near Valemount, B.C. Saturday.