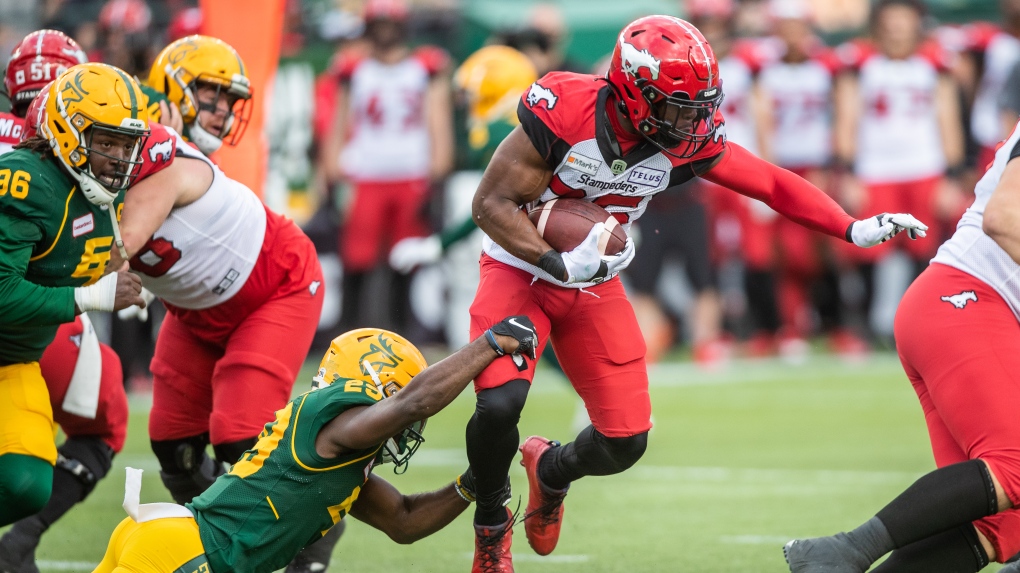 Rene Paredes kicked six field goals and Stefen Banks had four sacks and a fumble recovery as the Calgary Stampeders came away with a 32-16 victory over the rival Edmonton Elks on Saturday.

The Stamps got a measure of revenge for last Monday's 32-20 Labour Day loss to Edmonton.

The Stampeders (2-4) snapped a two-game losing skid and avoided losing both ends of the Labour Day series with Edmonton, something which last occurred in 2004.

The Elks (2-3) had a two-game winning streak halted.

The game got off to a very sluggish start.

Edmonton got on the board first on a 29-yard Whyte field goal midway through the opening quarter. Paredes responded with a 42-yard field goal for Calgary.

Whyte made it 6-3 for the Elks with a 41-yarder to open up the second quarter. Once again, Paredes drew his team even with a 46-yard field goal of his own.

Paredes booted a 44-yarder to put the Stampeders up 9-6 at the half.

A Richard Leonard interception of a Harris pass eventually led to a two-yard plunge into the end zone by backup QB Jake Maier, briefly replacing Mitchell, who returned to action after missing the last three weeks with a broken leg.

Paredes added a 35-yard field goal 10 minutes into the third quarter to put the Stamps up 19-6.

Sean Whyte kicked his third field goal of the night to close out the third, a 24-yarder.

Edmonton got its first interception of the season early in the fourth, and it was a big one as Trumaine Washington picked off Mitchell and took it back 47 yards for the pick six to cut Calgary's lead to three.

However, another pair of field goals by Paredes from 43 and 41 yards out and a last minute 50-yard TD pass from Mitchell to Kamar Jorden allowed the Stamps to pull away for the win.

The Stampeders return to action on Friday when they head to Hamilton. The Elks remain at home to host the Winnipeg Blue Bombers.

This report by The Canadian Press was first published Sept. 11, 2021