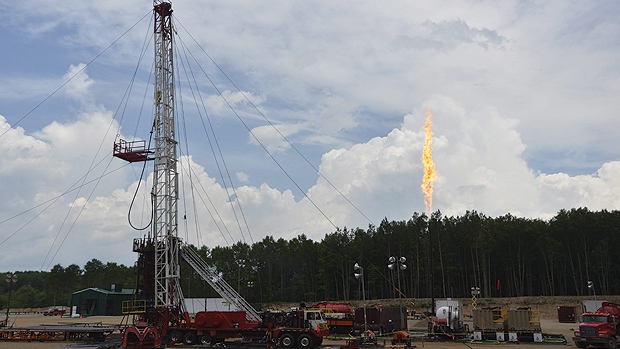 In a July 18, 2013, photo a huge plume of gas burns while work progresses at a fracking site run by Encana Corporation in a heavily wooded area between Kalkaska and Grayling, Mich. (AP / Detroit News, Dale Young)

Northern Alberta experienced another small earthquake over the weekend in an area where two others earlier this year were linked with fracking.

Natural Resources Canada recorded a 4.4-magnitude earthquake about 36 kilometres east of the community of Fox Creek around suppertime on Saturday.

The department says on its website there was no damage, although it says the quake was "lightly felt" in Edmonton, about 200 kilometres away.

It's the third quake of similar magnitude in the area this year.

Two quakes were detected in January -- one was 4.4 magnitude and the other 3.8.

The Alberta Energy Regulator and the Alberta Geological Survey have suggested both of those quakes may have been associated with hydraulic fracturing by the energy industry.