There was an eruption of laughter amongst First Nations people Friday at an Edmonton hotel when a panel of Chiefs was asked about Alberta's premier claiming to have Indigenous heritage.

Danielle Smith has spoken publicly about her Cherokee roots as far back as 2012, and in September she wrote in a tweet that she is "someone with indigenous (sic) ancestry."

But an investigative report published by the Aboriginal People's Television Network (APTN) this week found no records to back her claims, and Smith refused to provide any evidence, or even restate her claims, Friday.

"Premier Smith has heard about her heritage from her loved ones. Her family has spoken for years about their ancestry and she is proud of her family history. The Premier hasn’t done a deep dive into her ancestry but is proud of her roots," her spokesperson wrote.

CTV News Edmonton asked several Chiefs about the situation at a joint press conference hosted by Treaty 6, 7 and 8 where leaders gathered to speak out against Smith's plans for a sovereignty act.

"I think (she) should go to the pink palace here, the Canada office," Treaty 8 Grand Chief Arthur Noskey said with a chuckle.

"They're the ones that have that category of which bloodline you are and maybe she can find herself there. Maybe then we'll believe."

Smith's September claim came after a contractor on her United Conservative Party leadership campaign team was fired for "offensive and entirely unacceptable" recordings of him mocking Indigenous people.

my campaign to immediately terminate any contract or other dealings with the involved company.

As someone with indigenous ancestry, I honour the heritage of Canada’s Indigenous Peoples as one of our nation’s and province’s greatest treasures and strengths. /2

"As someone with indigenous (sic) ancestry, I honour the heritage of Canada’s Indigenous Peoples as one of our nation’s and province’s greatest treasures and strengths," Smith wrote.

"What we're realizing is that anybody wants to be a part of that Indigenous community if there's a benefit," Alexis said.

"At the university level we have people who are not Indigenous who claim that they are Indigenous to gain benefits to gain bursaries. There's always something behind it." 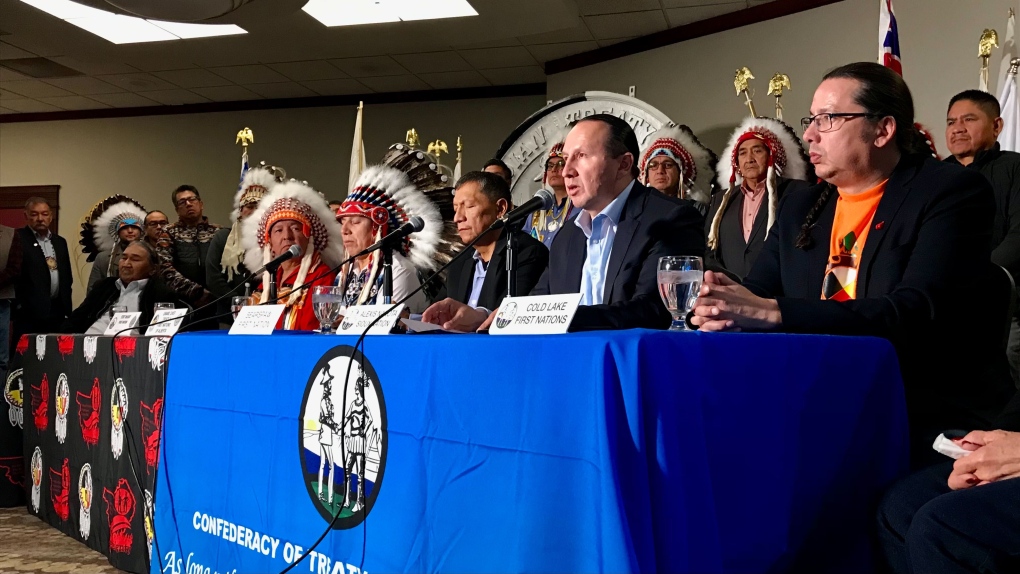 Chiefs from Treaty 6, 7 and 8 speak to journalists in west Edmonton on November 18, 2022 (Sean Amato/CTV News Edmonton.)

Chief Alexis and others are calling on Smith to stop the sovereignty act and consult with Indigenous people. He suggested the legislation is further proof that the premier's claims are bogus.

"A true Indigenous person would not go against all the Treaty people of this land," he said.

NDP MLA Richard Feehan was at that press conference and said Alexis' words meant far more than his on the topic of Smith's Indigenous claim.

"I think she needs to have a conversation with the First Nations about this," Feehan told reporters.

"Not with people like me or the Opposition. The First Nations chiefs, who are representatives of the people, need to hear from her and she has clearly failed to do that in every possible way."

A spokesperson for Smith said she was not available Friday to take questions from journalists.