EDMONTON -- As concerns over the growing number of variant cases of COVID-19 in Alberta continue, the province is shutting down in-person dining in restaurants starting Friday. A decision some Edmonton-area restaurants had already made for themselves.

"Few decisions in this pandemic are easy decisions," Alberta Premier Jason Kenney said during the announcement on Tuesday.

A step in the right direction, if you ask one Edmonton ICU physician.

"The fact of the matter is P.1 is effectively an airborne virus now," Dr. Darren Markland told CTV News Edmonton. "If you're in a place, and you have your mask off and you are eating, you're going to get the virus."

Markland said that without new restrictions, the spread of variant strains could easily get out of control, if they aren't already.

"As expected, we're seeing an increase of hospital admissions for these variants."

"The simple math is simple," he added. "If this keeps up, we could be seeing almost 4,000 cases a day by the end of April, without further restrictions."

NDP Health Critic David Shepherd said in a press release that the NDP is glad to see the province taking a stronger stance by closing in-person dining.

“However, we have spoken with many restaurant owners who have been closed more than they have been open this past year,” added Shepherd. “The Premier promised more monetary help and supports are on the way, but provided no details.

“We do know this Government hasn’t even spent money to help businesses through the first wave of COVID-19 as quickly as promised.”

One Edmonton brewpub owner made his decision last week.

"Cases are getting quite scary," Arcadia Brewing Co. owner Darren McGeown told CTV News Edmonton. "I mean if we don’t start closing down they’re going to get worse or we’re just going to be repeating this stop and go for another year."

The Edmonton brewery will no longer allow customers to linger inside while enjoying their Arcadia beverage and food. For the time being, they'll only be served through delivery or curbside pickup.

The Edmonton business owner says the past few months have seen his brewpub in a constant state of shutting down, then reopening.

"We opened in November," he said. "We had a staff member test positive, so we closed and then we opened, and then they announced the lockdown a week later and then we did takeout for a while. 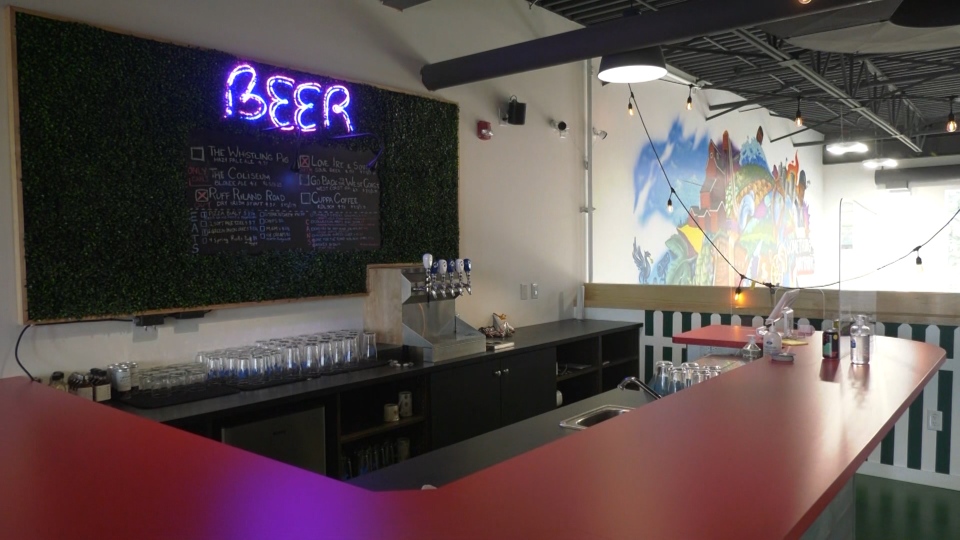 The brewery is now offering growler fills, as well as canned beer and merchandise sales; compatible with a takeout and delivery model, which is a luxury McGeown acknowledges is not an option for all businesses.

"Sometimes you have to just make the right decision for people," said McGeown.

'IT STARTED TO FEEL ALL TOO FAMILIAR': EDMONTON-AREA RESTAURATEUR

"It's really hard to just all of a sudden take a sharp right-hand-turn and open," she said. "It takes a little bit of momentum to get things going again, and we just wanted to make sure that we were still moving slowly and cautiously."

When Alberta restaurants were given the go-ahead to reopen their doors in February, Chartier initially held back.

The restaurant remained closed until after Valentine's Day, and proceeded with incremental moves, gradually opening on a small scale.

"It started to feel all too familiar to what was happening last time," she added. "Our approach throughout this has been to make sure that we are making the choices that feel right for us and not necessarily waiting for a government body to make those decisions for us."

That's why, on Saturday, the Chartier team decided to close their doors to indoor dining.

The restaurant's food will only be sold through delivery or curbside pickup, which could mean a hit to its bottom line but, according to Cheverie, that's a price worth paying.

"I would never want that to come at the cost of the health of our community or our team."

Meanwhile, in spite of the current circumstances, McGeown still finds reason for optimism.

"Long-term, if we can stop this spread, if we can close down, then we can be back open, with people getting vaccinated, things will be more back to normal by the summer hopefully," he said.