'Something special': 3 local kids, all bantam teammates 10 years ago, reunite as Edmonton Oilers

'Something special': 3 local kids, all bantam teammates 10 years ago, reunite as Edmonton Oilers

James Hamblin had a huge smile Monday when he spoke about his first NHL call up. He had tears streaming down his face just hours earlier.

"Kind of a rush of emotions. I immediately called my dad and hardly even got it out to him," the Oilers forward said. "A lot of tears were shed."

Not only is Hamblin expected to play his first NHL game in his hometown of Edmonton, he'll be dressed in the local team's orange and blue and sharing a dressing room with two childhood friends.

Tyler Benson was called up alongside Hamblin on Sunday. Both played bantam together with the South Side Athletic Club (SSAC) AAA Lions in 2012-13.

Oilers rookie goalie Stuart Skinner was in net that year.

"It feels like this is where (Hamblin) belongs and it's pretty cool that the three of us get to be here together," Skinner said.

"I'm so excited just for the opportunity to be here, to be around the guys. It's a lot of hard work put in, a lot of grinding to get here," Hamblin added. 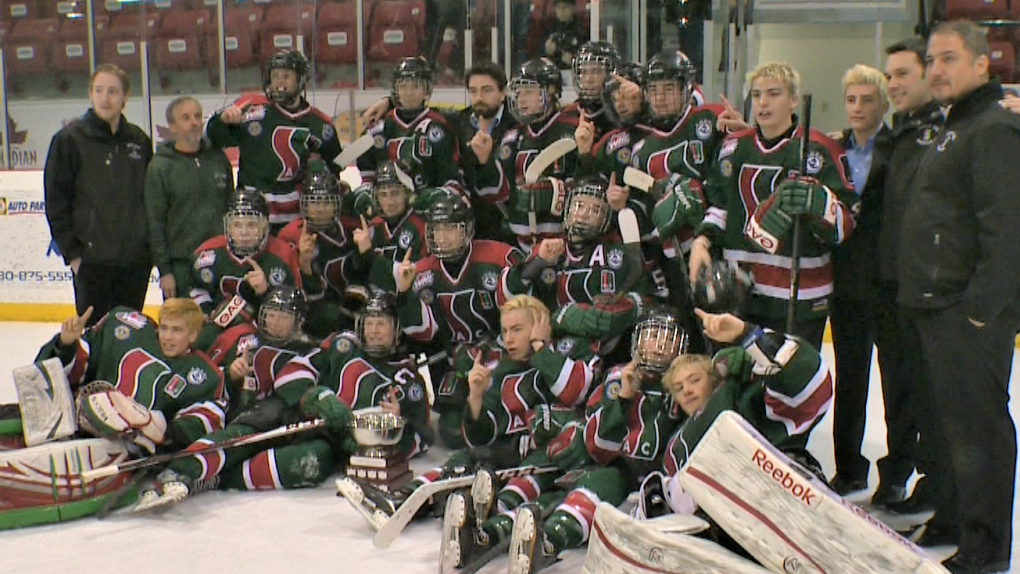 After winning a Western Canadian Bantam Championship together with the Lions, Hamblin went on to star for the WHL's Medicine Hat Tigers. He wasn't drafted in the NHL and was signed by the franchise as a free agent.

Benson struggled with injuries for the Vancouver Giants, but was still a high second-round draft pick of the Oilers. He has three points in 36 games in the NHL and is recovering from a knee injury.

Skinner went on to play in the Memorial Cup with the Swift Current Broncos. He was drafted by Edmonton in the third round. He started the year as backup to Jack Campbell but has played well and is pushing the veteran for playing time.

"It's amazing. Isn't hockey a small world? What a great story that is. They've all had different journeys to get to that room and I think it's special," Oilers Head Coach Jay Woodcroft said Monday.

While Benson will likely have to wait to play his first NHL game of this year, Hamblin is expected to play against the Florida Panthers at Rogers Place Monday.

Woodcroft credited Hamblin's tenacity for not quitting after he wasn't drafted.

"He's a hardworking guy and I'm happy that he earned his first NHL recall. He's relentless. He's a relentless person, driven to be the best that he can be," Woodcroft said. 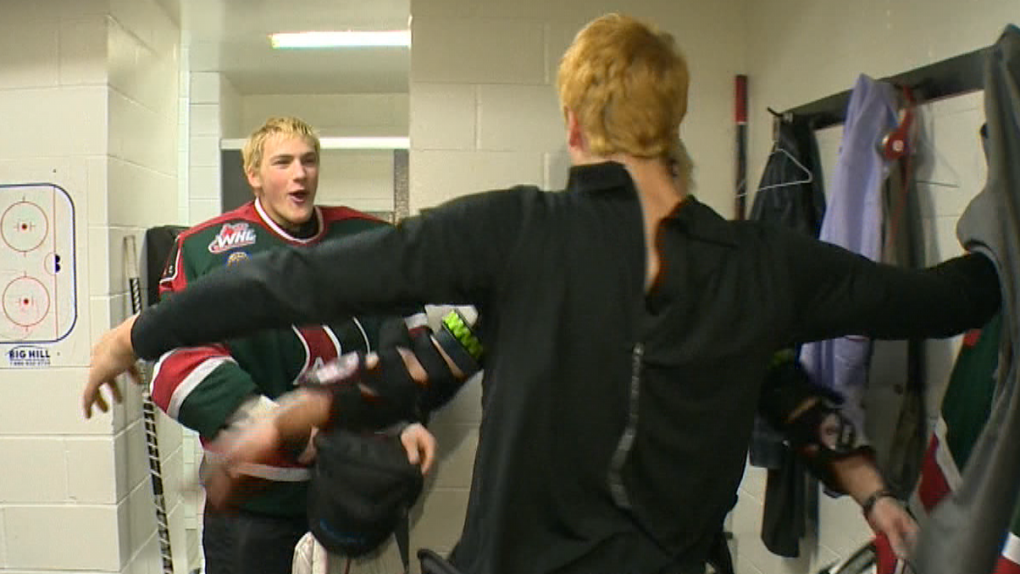 Stuart Skinner and teammates celebrate a championship with the the South Side Athletic Club (SSAC) AAA Lions in 2012-13 (Sean Amato/CTV News Edmonton.)

'THE CREDIT GOES TO THEM'

Hamblin said he'll have a bunch of family and friends in the stands to cheer him on.

The Oilers roster moves were also extra special for one man smiling all the way from Manitoba Monday.

Taylor Harnett coached all three players with the SSAC Lions 10 years ago. He's now with the Junior A Waywayseecappo Wolverines.

"I knew there was something special there. Obviously, I didn't foresee that this day would come. But I definitely knew they were capable of great things," Harnett told CTV News Edmonton.

"I feel fortunate I was able to help them…But the credit goes to them. They always worked hard. They always had a goal in mind. If you're goal driven, if you have a plan and you work hard, you can accomplish great things."

Harnett said he too was a bit emotional when he heard that Hamblin would get an opportunity to play in an NHL game.

"I made a prediction that he was going to get an opportunity one day because of his desire and his determination," the coach recalled.

Harnett is an Oilers fan and said it's a thrill to watch the men he knew as teenagers get opportunities, not only at the highest level of hockey, but also with their hometown franchise.

"Stuart Skinner is an amazing character and he was always in a great mood. Tyler led by example and those guys had an ability to light up a room and keep it loose," he said.

"I think it has to do with Taylor's coaching, for sure. If we didn't win those games, if we weren't as good as we were in bantam, maybe we weren't drafted in the same kind of position and you never know how things work out," he said with a smile.

"It is really cool…there must be a good system at South Side. They must be doing something right," Hamblin added.

In a terrible way, the death of Tyre Nichols brings vindication to members of the Black community in Memphis who live in terror of police.