Edmonton’s favourite crime fighter is at it again, this time helping young cancer patients and their families.

The Leukemia & Lymphoma Society has enlisted the help of Spider-Mable in a new activity book.

“We were looking to update a bunch of our pediatric resources and wanted to include an activity book and so it was a perfect opportunity to chat with Mable and her family about doing the book,” said Lauren Atkinson, the regional director for the Leukemia & Lymphoma Society in the Prairies.

“I was just in awe,” said Mable Tooke, also known as Spider-Mable, after seeing herself in comic form. 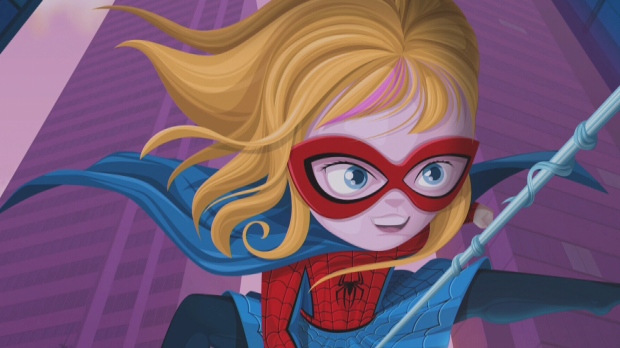 The comic-style book gives others a glimpse into Spider-Mable’s battle with Leukemia.

“To show kids my adventures with cancer,” Mable said.

“If you have it, don’t let it get in the way of having fun,” she added.

“Her story really makes things more relatable and less intimidating and that at the end of the day is really what we’re trying to accomplish,” said Atkinson.

Mable was just four years old when she was diagnosed, a time her mother Lisa Tooke doesn’t like to think about.

She said an activity book like Spider-Mable vs. Leukemia would have been a big help at the time. 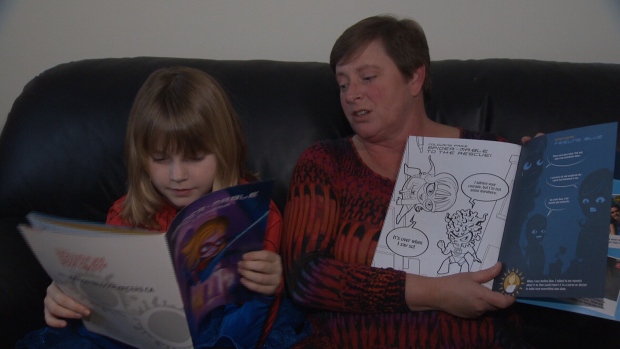 “What this does, is provides that something to look at during that first week of total shock.”

“It’s really designed so that kids can have a full understanding of what kids have gone through,” said Atkinson.

It was during Mable’s hospital stay she first discovered Spider-Man.

“It all began with a song,” said Lisa.

“Her first weekend in the hospital, she’s sicker than a dog, then the music therapist comes around and one of the kids asks for the Spider-Man song.”

They started bringing Spider-Man comics to the hospital for Mable to read.

“I love Spider-Man a lot because well I just had a connection to him when I was in the hospital,” Mable said.

Then in 2015, Mable’s wish to fight crime with Spider-Man was granted by Children’s Wish. She was transformed into ‘Spider-Mable’ and helped save then Oilers Captain, Andrew Ferrance who was capture by an evil villain.

“There’s only one word for her special Spider-Mable day, amazing,” said Lisa.

“We were quite overwhelmed just to see so many people rally behind just to make her to make her day a little more special.”

Lisa said Spider-Mable is slowly becoming just Mable when it comes to her daily activities and continues to volunteer with several organizations.

“I don’t know if she’ll ever stop of really being out there and helping, but I think she’s now much more comfortable in herself. She no longer needs the mask,” she said.

“You can be a superhero by just doing everyday stuff,” said Mable.

The free activity book is available to download or order on the Leukemia & Lymphoma Society of Canada’s website. 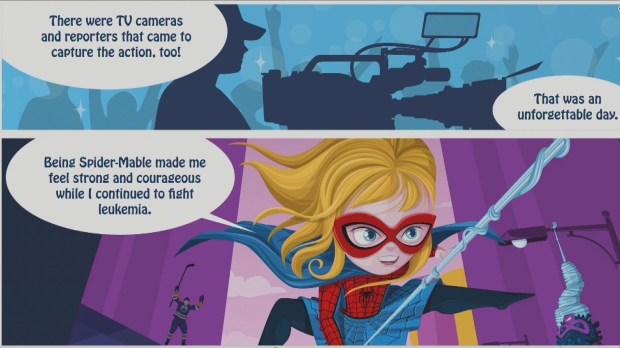