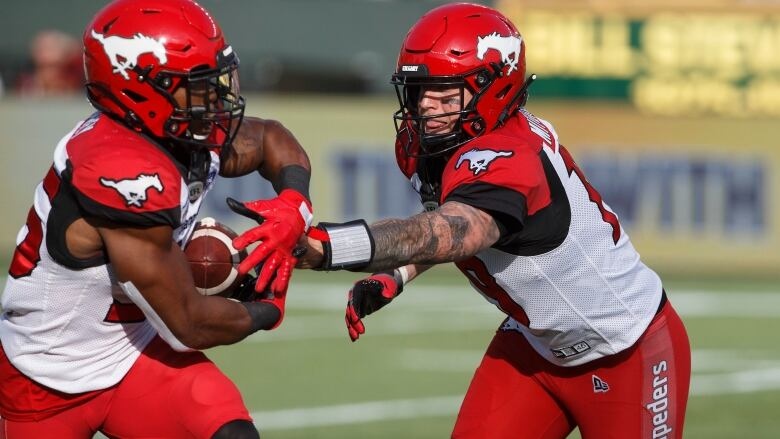 Bo Levi Mitchell completed a pair of touchdown passes as the Calgary Stampeders beat the rival Edmonton Eskimos for the second week in a row, 33-17 on Saturday.

The Stampeders improved to 7-4, and moved into a second place tie for points with Saskatchewan in the West Division.

Edmonton (6-6) has lost three straight games and also played without quarterback Trevor Harris for the bulk of the game due to an upper-body injury in the second quarter.

Edmonton's defence came up big early with a Don Unamba interception of Mitchell to the Stampeders 29-yard-line, setting up an eight-yard touchdown pass from Harris to Tevaun Smith.

The Stampeders took the lead early in the second quarter on a 25-yard passing major from Mitchell to Reggie Begelton.

The Eskimos suffered a blow when Harris came down with an injury on what appeared to be his throwing hand on a non-contact play.

Backup Logan Kilgore came in for Harris, taking his first snaps of the entire season.

His first drive led to a 10-yard Sean Whyte field goal. Harris remained on the sidelines throughout the remainder of the game, looking like he could return if needed.

Paredes kicked 46-yard and 27-yard field goals for the only scoring in the third quarter and then started the fourth with a 43-yarder.

The Stampeders pretty much put the game away five minutes into the final frame when DaShaun Amos picked off Kilgore and took the interception return back 79 yards into the end zone.

Kilgore atoned with a one-yard TD plunge on his team's next possession.

The Stampeders will play host to the Hamilton Tiger-Cats next Saturday, while the Eskimos will have a bye week.