EDMONTON -- Edmontonians have been making cafés modelled off a popular brand with one catch: they are only for dogs and are completely free.

Starbarks Edmonton, on 86 Street and 64 Avenue near Mill Creek Ravine is a pop-up dog café offering treats, water, and a stick library all for dog’s enjoyment.

Sarah Mackey, owner of Starbarks Edmonton, said she first created a stick library outside her home, in the form of a regularly stocked bin full of sticks for dogs to choose from.

“We realized that stick library is not a very accurate name because the dogs can keep the sticks,” Mackey told CTV News Edmonton. “So it’s more of a stick gift shop with no charge.”

Starbarks was created by Mackey a few months ago, based on how popular the stick library was and inspiration from a similar dog-only café called Star Pups in Toronto.

Mackey also designed sidewalk obstacle courses drawn with chalk for owners to guide their pets through.

According to her, dozens of dogs visit with their owners every day as the café is nestled between a nearby off-leash dog park and a Tim Hortons.

Even people who are not dog owners like to stop by to admire the dogs visiting and enjoying the treats.

“It’s a way to just brighten up everybody’s spirits,” she shared. “It’s fun for everybody to see the dogs and look at the pictures on Instagram and share them.

“It’s been a fun way to connect with people at a time when it’s a lot harder.”

‘WE LOVE IT’: NEIGHBOURS ENJOY CAFÉS AND THEIR COMMUNITY CONNECTIONS

Vanessa Grabia and her dog Muddy Waters told CTV News Edmonton in an interview that they love the café.

“We do our walk every night and stop on our way home,” she said. “It’s something to look forward to everyday.” 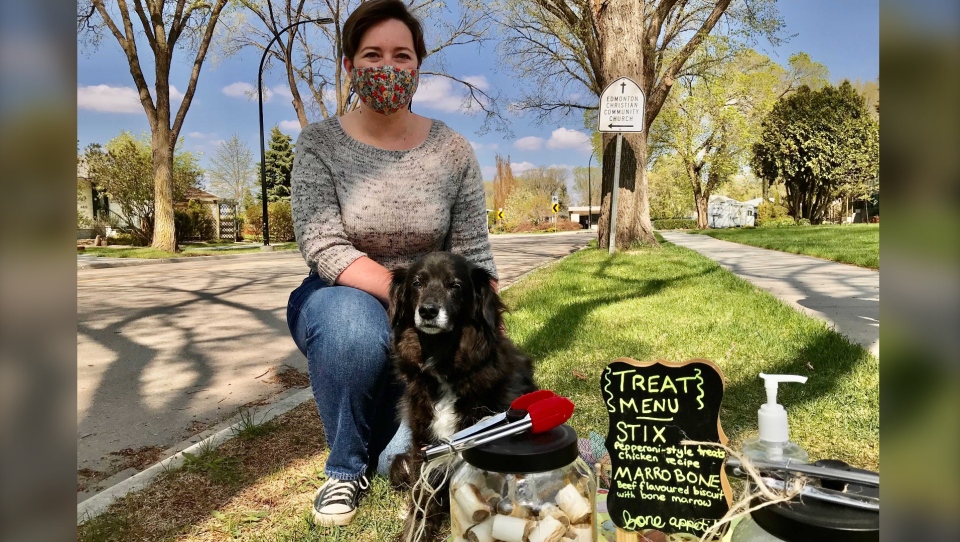 For Mackey, the project allowed her to meet dozens of neighbours that she would not have otherwise talked to.

“We’ve lived here for 10 years,” she said. “I’ve probably talked to more neighbours in the last month than in the entire 10 years previous.”

There are already people asking Mackey if they can franchise her concept for their own neighbourhoods. She’s gladly shared the concept with anyone who asks.

“I can see this turning into a bit more of a thing,” she said. “It’s just a ton of fun.

“It’s nice to see that sense of community,” she added. “I encourage everyone to create their own café. It’s not very expensive, it’s very inexpensive.”

Visitors to Starbarks are asked to snap a photo and share it on social media using the #StarbarksYEG.

Karen Parker created a dog café in the Garneau area along the 83 Avenue bike lane after also being inspired by Star Pups in Toronto. She is friends with Mackey and did not realize at first that the two of them were opening dog cafés.

“Sarah was an early adopter,” she said. “We both took the idea independently… and have been enjoying.” 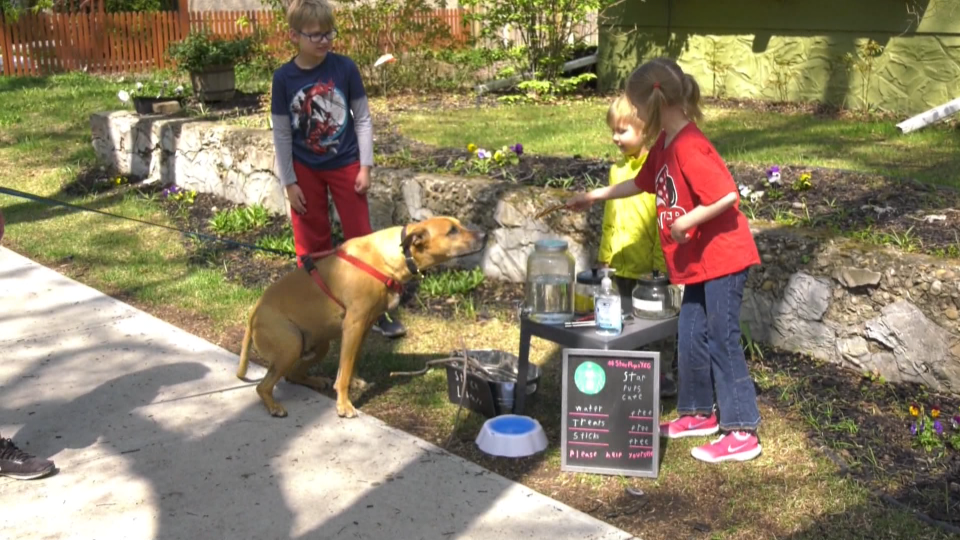 She told CTV News Edmonton that her café, called Starpups, has not only helped build connections within the community, but helped her daughter to get more comfortable around dogs.

“My middle kiddo earlier this year started being very nervous and a little bit scared around dogs,” Parker said. “So this has actually been a really great way for her to interact with them on her terms and be able to stand a little bit further away… and get comfortable.”

“Now she is sometimes even offering to give them a pet,” she added. “It’s been really wonderful to see how this has helped her.”

“Neighbours that we’ve never met before post photos on Instagram of their dogs at our café,” she said. “It’s great.”

Both of the cafés have hand sanitizer and tongs for people to use to ensure it is a safe experience.