According to town officials, the fire started at around 6 p.m. inside the building and quickly spread across the roof. Dozens of people came out to watch the fire as crews attempted to douse it from the ground and above with ladder trucks.

In total, six fire trucks and 24 firefighters from the Stony Plain Fire Department and Spruce Grove Fire Services were called to the scene.

The 63-year-old building had been home to 220 curling club members.

"It is with a heavy heart that we have to tell you that we have lost our curling club in a fire today. It is a complete loss," Westridge Curling Club president Kevin Hedley said in a statement on Facebook.

"Thank you all for your support and making this club what it is." 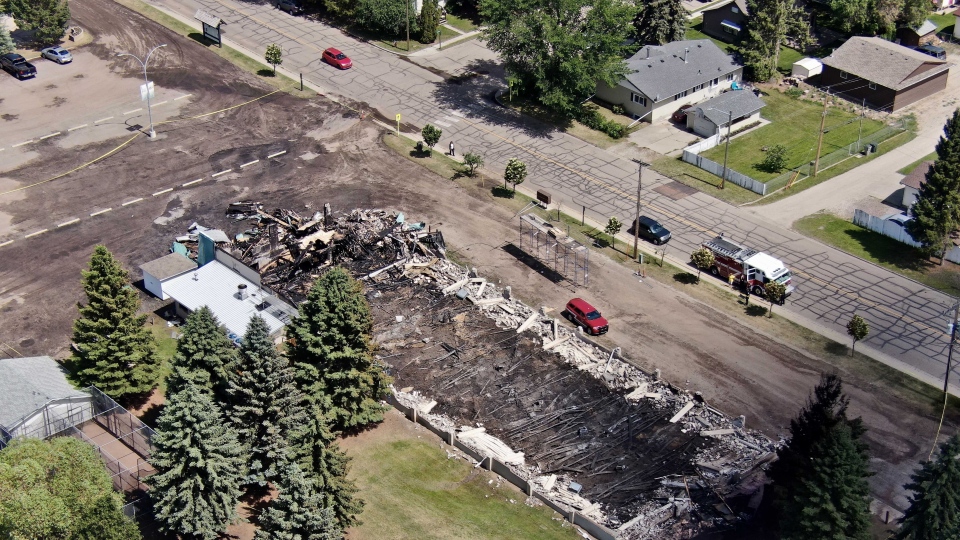 Stony Plain mayor William Choy called it a staple that he, like many others in the community, had grown up using.

"I remember as a kid going to the rink with my phys ed class and learning how to curl," he told CTV News Edmonton, noting the community was collectively grieving.

"We'll take a couple days to live that a little bit and understand it and come to the reality and grips of that, and then from there, as I say, we'll just get together with the curling club, sit down, and make some plans."

He promised on behalf of the town: "We will rebuild, and we will assist the curling club in any way that we can. And we'll make sure that there is curling back in Stony Plain."

INVESTIGATION TO BE DONE

Neither official speculated on what caused the fire, but Hedley promised to keep the community informed as an investigation is done.

The building had been empty and there were no reported injuries, according to Stony Plain Fire Chief Trevor Mistal.

Crews were still working as of 7:30 p.m. Smoke from the fire was visible from as far away as Devon, about 30 kilometres southeast of Stony Plain.

RCMP and Peace Officers closed the area to traffic and pedestrians.

According to the FortisAlberta website, the fire caused an unplanned power outage affecting 26 customers. The company was working to restore power.

The fire investigation will begin when the fire is contained, according to town officials.