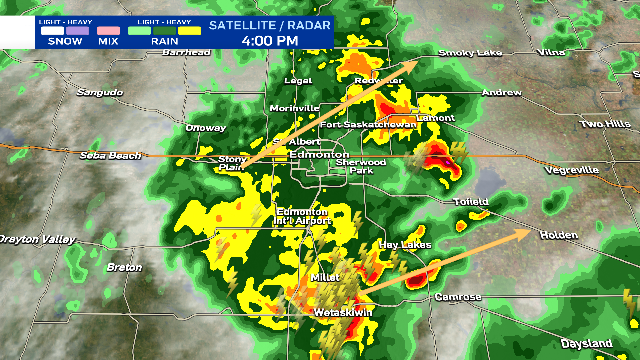 A cluster of showers and thunderstorms dumped pockets of heavy rain and even some pea-sized hail on the Edmonton region early this afternoon.

For most areas, the storm was (as expected) more bark than bite.

Rainfall totals from around the city range from three to 15 mm, according to our network of CTV rain gauges.

More showers and pockets of heavier rain will push west to east across the city and surrounding areas through the remainder of the afternoon. While there may be a few lightning strikes, the stormiest weather appears to be over for the city.

Severe Thunderstorm advisories remain in effect for areas south and east of Edmonton. But, the City of Edmonton is not included in those watches and warnings.

We'll have a full recap and a look ahead to another wet day Thursday on CTV News at 5 & 6 p.m.