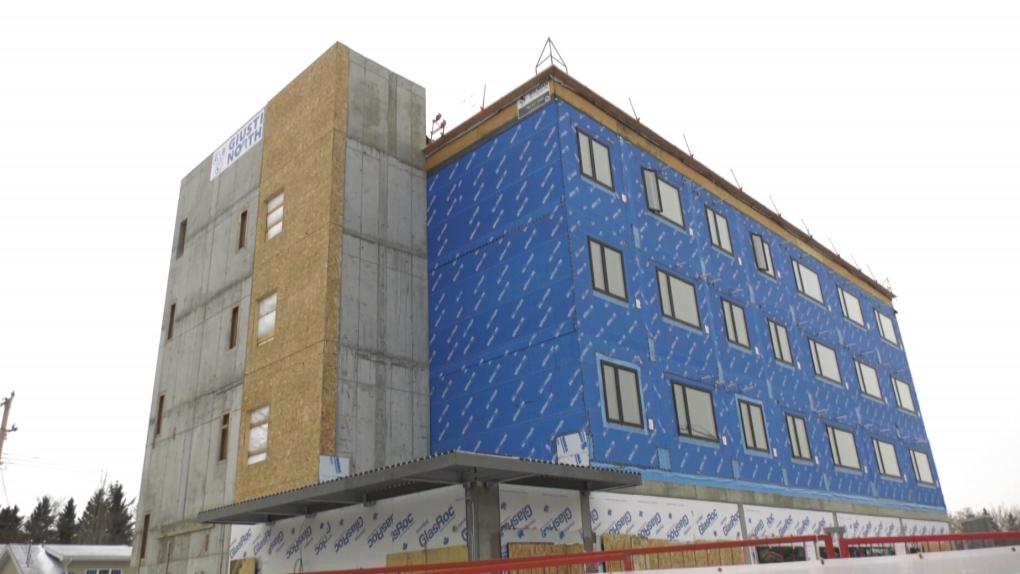 Affordable housing was a major focus during the 2021 construction season.

Five affordable housing projects scheduled to be completed by the end of the 2021 construction season won't be ready until next year.

The city provided an update on the construction season Tuesday in King Edward Park, where construction on a new supportive housing project is underway.

“It is possible to end homelessness through adequate housing and support,” Deputy City Manager Adam Laughlin said. “This is just one of five locations throughout the city where we, along with Homeward Trust, are rapidly constructing permanent housing that will play a significant role in creating spaces that people can call home.”

The city received funding in the form of grants from Ottawa for the projects, which were originally intended to be completed by the end of this year. The King Edward Park project is now scheduled for completion in the spring of 2022. Laughlin said the projects are still on track.

“When you get a grant, like we did, there are aggressive time frames that are typically applied to that,” Laughlin said. “Once you scope it out and confirm, then you can define the date more accurately based on the information you have.”

He added that the pandemic affected the availability of materials and other resources.

There were other hiccups during the 2021 construction season. A major phase of the Jasper Avenue project wrapped up, opening all lanes of traffic from 109 Street to 104 Street after two years of construction. While the city called it a success, there were complaints about the walkability and vibrancy of the new street.

The Ada Boulevard commuter bridge also drew public concern, with the city opting to raise the height of the railing on the bridge shortly after it reopened.

Completion of the Valley Line Southeast LRT has also been pushed to summer of 2022, after the city’s public-private partner TransED experienced delays due to the pandemic.

“Be assured, TransEd is feeling the financial consequences of the delay,” Laughlin said. “We know the impacts these delays have on people’s lives and we remain committed to working with TransEd to ensure the line opens for safe and reliable service, and that Edmontonians get the system they were promised.”

In total, the city says $1 billion was put toward 275 projects this year.

“From roads to pathways, firehalls to public transportation, 2021 was the largest capital project season in several years,” Laughlin said. “As of late November, we’re pleased to report that 92 per cent of our projects remain on budget, and close to 80 per cent are on or ahead of schedule.”

In its announcement, the city noted construction season never really ends in Edmonton, and work will continue on projects such as the Warehouse Campus Park, trail and park renewals, neighbourhood renewal, and transportation projects.

This Saturday, Canada will mark the 30th anniversary of Dr. Roberta Bondar's groundbreaking journey to space, when she became the first Canadian woman and neurologist to do so.

'I need to be with my family': Afghan refugee pleads for help reuniting with loved ones

A young Afghan woman who escaped to Canada last summer is desperately worried for her family members who did not make it out of the country and are now living in hiding.

Inflation: These items saw the largest price increases in Canada

On Wednesday, Statistics Canada reported that the annual pace of inflation climbed in December at a rate that hasn't been seen in 30 years. CTVNews.ca looked at the consumer items that saw the largest year-over-year increases in prices.

A group of some of the world’s wealthiest individuals – including five Canadians – have signed onto an open letter calling on the richest among them to pay their fair share in taxes.

Ontario will allow restaurants to reopen at 50 per cent capacity on Jan. 31 as part of the province's plan to lift restrictions over the next few weeks, sources say.

When could the COVID-19 pandemic switch to endemic?

An infectious diseases specialist says the COVID-19 pandemic could begin pivoting to an endemic status in higher-income countries by early spring, based on how Omicron is spreading and affecting hospitalization rates.

Canadian trial: Remdesivir reduces need for ventilation by half for COVID-19 patients

A Canadian study suggests the antiviral medication remdesivir could have a 'modest but significant effect' on COVID-19 patient outcomes, including decreasing the need for mechanical ventilation by approximately 50 per cent.