'Taking it to the next level': Local producers supported by new EIA facility 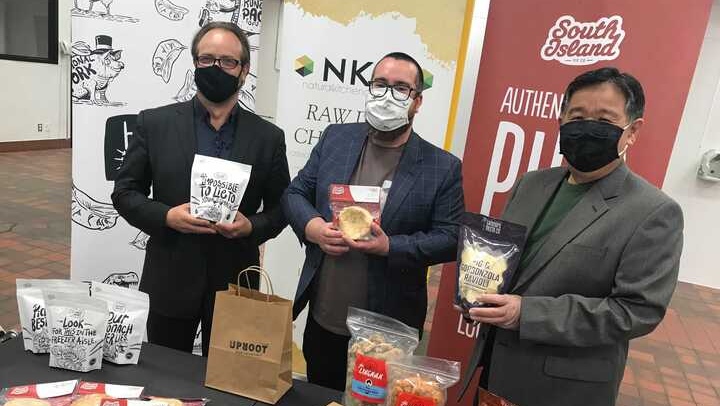 The Edmonton international Airport (EIA) is helping local food companies grow with the launch of a new manufacturing facility.

The recently developed space is valued at $7.5 million and provides food innovators access to national and global markets by filling a regional gap in food manufacturing, according to a news release from EIA sent Monday.

The airport has converted a former flight kitchen into a federally certified food production and contract packaging facility. It will be overseen by an advisory team who will help companies with their operations, marketing and sales.

The space is already being utilized by its first long-term tenant, Edmonton-based Uproot Food Collective.

“This is kind of taking it to the next level,” Chris Lerohl, the CEO of Uproot Food Collective, said.

“This facility will enable us to take that to the rest of Canada, and for us that’s everything.”

According to EIA, roughly 65 per cent of Canada’s food manufacturing and processing happens in Ontario and Quebec. Alberta and British Columbia makes up 21 per cent.

“Over the last year we really pivoted and pushed Uproot and launched that within the region and the province, and now can reach 85 per cent of Albertans,” Lerohl explained.

In the release, the airport authority notes the goal of the facility is to keep manufacturing jobs in the Edmonton region, with the intent of increasing capacity for value added production, and expanding access to Canadian-made food products.

“The world needs what we grow in Alberta and across the Prairies,” Jim Carr, the minister and special representative for the Prairies, said.

“By investing in this new food processing facility, we are ensuring that our producers have access to key services, including certification, packaging, food safety, and retail order tracking that will allow them to reach national and global markets.”

“Our collaboration with EIA provides a great opportunity to grow the value-added food sector throughout Western Canada,” Lerohl added.

The federal government kicked in $550,000 for the facility.

The State Department on Sunday ordered the families of all American personnel at the U.S. Embassy in Ukraine to leave the country amid heightened fears of a Russian invasion.

Following the alleged abduction of several female Afghan protestors from their homes a few days ago, the United Nations is urging the Taliban to provide information on their whereabouts.

Focus in U.S.-Canada border tragedy to shift Monday as accused appears in court

The man accused of attempting to smuggle across the Canada-U.S. border a family, all four of whom died, will appear in court in Minnesota on Monday.

Over 700,000 Canadians flew internationally in December despite Omicron surge

Despite the federal government's advisory against travelling outside of Canada taking effect midway through December, last month saw more international travel to and from Canada than any other period since the start of the pandemic.

The loss of biodiversity of birds and mammals from human-induced climate change has reduced the ability of plants to spread their seeds via animals according to a new study.