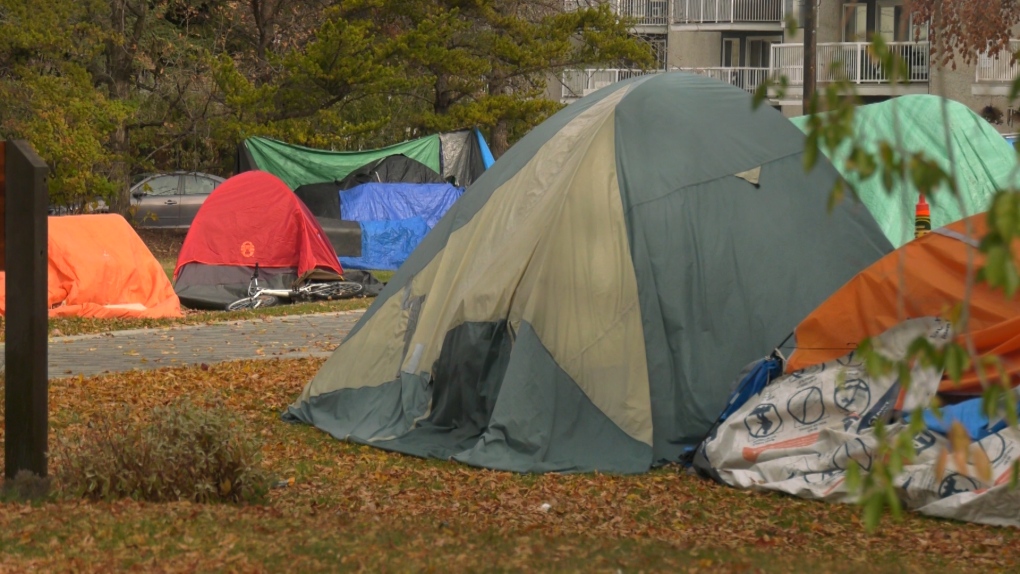 Peace Camp, a homeless camp in Old Strathcona, will be closing, according to a camp co-organizer. Tuesday, Oct. 13, 2020 (CTV News Edmonton)

EDMONTON -- A homeless camp in Old Strathcona is scheduled to close -- really close, this time -- as the city plans to use the Edmonton Convention Centre as a pandemic shelter over the winter.

“The closure will occur over the next seven days to ensure that the transition will have the least possible negative emotional, physical and logistical impact on the campers and organizers,” Peace Camp co-organizer Cameron Noyes told CTV News Edmonton on Tuesday.

The camp moved to Light Horse Park on Sept. 27 after being ordered by the city to close twice in Dr. Wilbur McIntyre Park.

Noyes said the camp hasn't garnered the kind of attention to the needs of the homeless community its organizers wanted to.

“Although some housing organizations have come to the site we have seen very little in the way of housing from them. The best results we've had during our time at camp have been via our organizers who have been working to help transition people,” he commented.

Fatigue and mental health issues among volunteers and organizers at the camp is one of the reasons Peace Camp will disband, according to Noyes.

“These volunteers have been largely carrying the costs of supporting well over 100 unhoused people and it is an incredible strain without a real commitment of support from agencies or the City.”

He also said there has been concern over fentanyl-laced drugs in the neighbourhood and camp recently.

Mayor Don Iveson said city staff have been working quickly to make sure people sleeping rough will have a warm place to sleep when winter arrives.

“We're in a hurry-up mode on that, recognizing that it only buys us a few months until the spring when we really do need those federal dollars to acquire units,” said Iveson.

“There will also be bridge housing opening up at the Cities Initiative this month, we’ll have a hotel to announce soon, as well the old jockey quarters at Northlands -- those will be opening up this month, too.”

Iveson said he has also been in contact with organizers at Camp Pekiwewin, a homeless camp in Rossdale, about their need for shelter.

“I think that the spirit in which we want to open this pandemic accommodation is one of healing and one of inclusion and one of reconciliation,” he told media the same day.

“My sense is that that will be well received by most of the people in the camps and there's an open invitation for them to come as soon as the bridge housing and the convention center are open.”