The push to create Edmonton's first car-free avenue, making it a 'place for people'

A local advocacy group wants the city to turn a chunk of 102 Avenue downtown into a pedestrian-only area, and at least one city councillor is supportive of the idea.

Paths For People doesn't want vehicles back in the 500-metre section of the urban avenue, which runs from 99 Street at Churchill Square to 103 Street.

The roadway is currently closed for LRT construction, but the current plan is to reopen one lane to traffic, with vehicles permitted to go east only.

Instead, the non-profit group is sharing renderings showing people, tables and bicycles occupying the space rather than cars.

"It makes a lot better use of the space that we have," chair Stephen Raitz said.

"It can take something that's going to be of limited use to people driving, and turn it into something really valuable to people walking and rolling….We're not asking to take a lane away on the Anthony Henday, this is a people place first."

Edmonton doesn't have a street that's entirely for pedestrians.

Nearby, 104 Street has been closed for farmers' markets on weekends and there's been proposals over the years to close Whyte Avenue to cars temporarily.

"We've seen it work across the world…It would be really exciting to finally get our own Stephen Avenue." 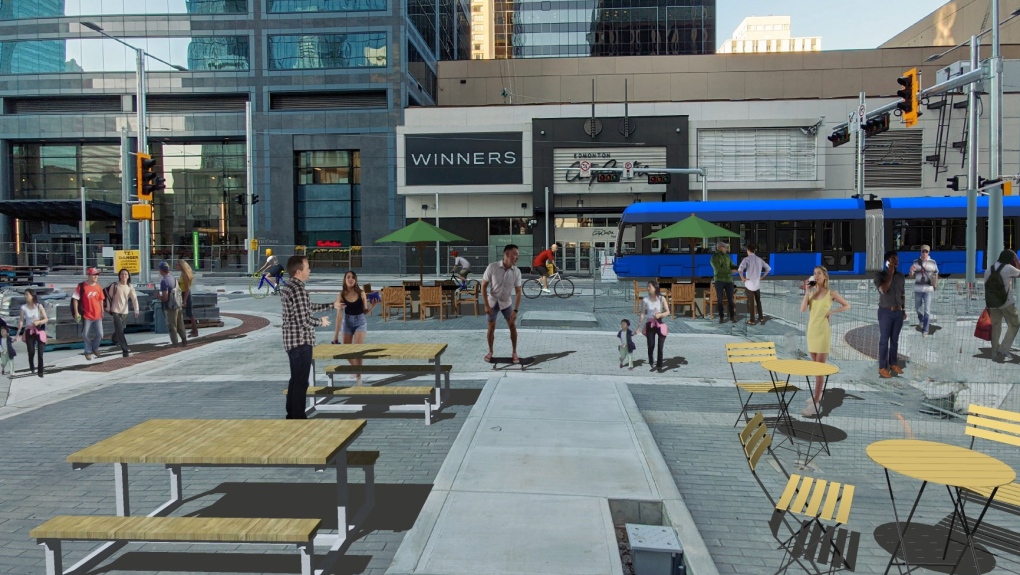 A rendering of what 102 Avenue in downtown Edmonton could look like as a car-free zone. (Source: Paths For People)

Downtown councillor Anne Stevenson wants city administration to study the proposal, and she'll bring forward a motion on Dec. 6 to do that.

"It's an idea I'm really excited about. The study is just doing the due diligence to make sure we're addressing any genuine technical challenges," she said.

"I see patios, I see festivals, I'm really excited about some of the work that Edmonton City Centre may be doing to open up their space, to have more stores facing right onto 102 Avenue."

Stevenson said the city will have to work with parkade owners in the area to ensure access to their structures, but she pointed out the road has already been closed for LRT construction.

She added the city will need to consult with business owners in the area who may be concerned about parking and a reduction in customers that drive.

Paths For People has shared studies that show there's more people walking on the sidewalk in the area than there are drivers turning onto 102 Avenue.

The 2017 traffic count that the group reposted counted 6,687 pedestrians and 1,884 drivers who were turning over a 24-hour period.

The U.S. House committee investigating the Capitol insurrection issued a new batch of subpoenas Tuesday to some of Donald Trump's closet advisers, including Rudy Giuliani, as the committee inches closer to the former president.

Here's why 5G is so concerning for U.S. airlines, and what Canada has done to fix it

The emergence of 5G technology has been concerning for U.S. airlines, but Canada has already taken steps to address the safety risks, including buffer zones around Canadian airports and positional shifts to antennas.