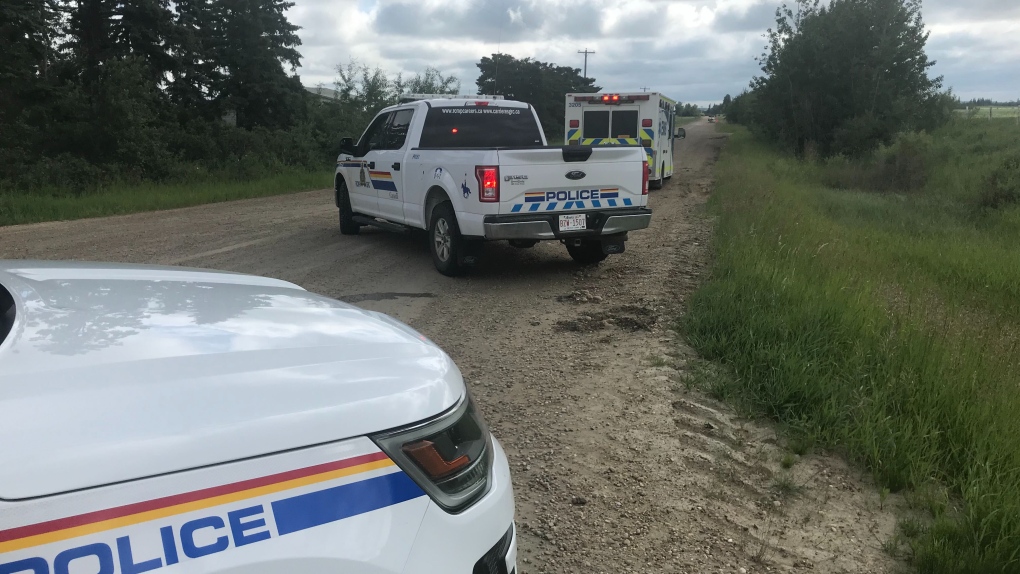 There was a heavy police presence near the Villeneuve Airport in Sturgeon County Monday, June 29, 2020. (CTV News Edmonton)

EDMONTON -- Police are still looking for an unidentified third man involved in a string of crimes near Villeneuve early Monday morning.

RCMP say there is no description of the man, but that Mounties have been told he has left the area.

An armed robbery, gunfire, carjacking, and police pursuit saw an area near Highway 44 and Township Road 544 contained by RCMP for several hours on June 29.

However, RCMP say the criminal commotion actually started hours earlier with a break-and-enter at a Morinville business around 2:30 a.m. Thieves stole a vehicle from the businesses, and left one there.

Two hours later, the stolen vehicle was found in a rural area near Morinville.

RCMP say "sometime later" a Cadillac Escalade was stolen from Bon Accord.

A member of the public called 911 when, around 5:40 a.m., the suspects in the stolen Escalade tried to steal his vehicle and shot at him when he followed. He wasn’t injured.

The vehicle also did not stop when a Mountie, who says they saw one of the suspects had a gun, fired at the Escalade. The fleeing men then crashed into a commuter at Highway 37 and Highway 44, coming to a stop off the roadway and ran away on foot.

RCMP arrested two men with the help of police dogs by 8:30 a.m., after they attempted to steal another vehicle.

"There is no indication that the suspects were injured by the prior gunfire. One of the males was injured as a result of a dog bite and treated for minor injuries before being lodged in police cells," a statement from RCMP reads.

Andrew Elliott Heigh, 28, and Aries Allan Briere, 19, have been charged with possession of a weapon when prohibited, possession of stolen property, and two counts of attempted theft of a motor vehicle.

Heigh and Briere will appear in a Morinville courtroom on Thursday.

Police say they have information suggesting a third man is still at large.