EDMONTON -- Alberta leads the country in COVID-19 cases caused by more transmissible and more dangerous variant strains. A fact that has one of the province's former chief medical health officers saying a 'third wave' could be just around the corner.

"I believe we probably are going into a third wave," Dr. James Talbot told CTV News Edmonton. "We should know within a week or so."

As the number of COVID-19 cases continue to trend upward in the province, so too have hospitalizations. That was the main factor cited by Alberta's health minister, on Monday, for the decision to keep current restrictions as they are, rather than loosening them.

"This is a problem and a warning sign we must take seriously," Tyler Shandro said Monday, adding the province expects hospitalizations to climb to 300 patients within the week.

"The path forward is about taking our time to make good decisions based on the evidence," he said.

On Feb. 8, the province allowed restaurants to reopen their doors so customers could once again enjoy the dine-in experience.

Now, a month-and-a-half later, as the variant case count climbs, there are questions about what consequences are being faced because of that decision.

"We haven't really seen that explicit admission that there's transmission occurring in restaurants," Conor Ruzycki, aerosol scientist with the University of Alberta, told CTV News Edmonton. "It's a little concerning."

Perhaps not explicit admission, but Alberta's chief medical officer of health did seem to at least acknowledge the occurrence on Monday.

"We have seen for example very rapid spread in some restaurants, where individuals who have the variant were infectious, went to multiple restaurants and spread the virus very quickly, in multiple locations in one night," Dr. Deena Hinshaw said Monday. 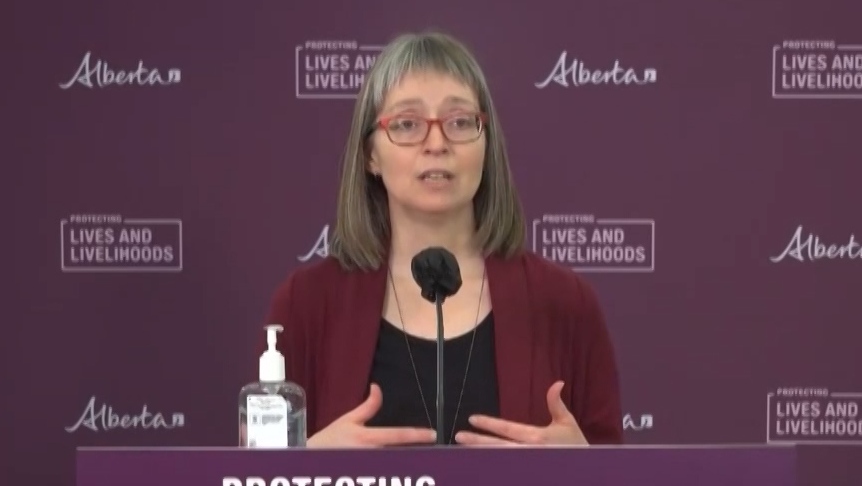 "It seems to be a trend that wherever people are, whether it's their own workplace, whether it's a location where they're engaging in recreation or, again, at a restaurant, the common thread is when we let our guard down the virus spreads quickly."

As the combination of variants and lack of vigilance by some Albertans are being pointed to as likely reasons for the recent increase in cases and hospitalizations, Hinshaw says data shows between 20 and 25 per cent of new COVID-19 cases in Alberta stem from a variant strain.

"What we've seen in other countries," said Hinshaw, "is that because the variant is more transmissible that it eventually does become the dominant strain where there is spread in the community. It's hard to say when that might happen."

"I think the prudent decision would be to take a step backward," he said, "really reevaluate if the benefits of allowing indoor dining are outweighing the risks that are associated with them."

As for the possibility of a 'third wave,' Dr. Talbot has a dire prediction.

"It will be worse than the second wave," he said. "By that I mean hospitals and ICUs will come under pressure faster and we're going to need to respond faster."

As COVID-19 cases rise in the province once again, hospitals are bracing for more patients.

Kerry Williamson, spokesperson for Alberta Health Services, tells CTV News Edmonton hospitals have not yet increased capacity for COVID-19 patients, but with rising case numbers they are preparing to.

There is no word on when the province might make a decision on changing current restrictions.